Object of the Month: “Velorio del angelito” (The Little angel`s vigil), A Picture of a custom

In the month of September the house museum of Eduardo Frei Montalva highlights as an object of the month the work “Velorio Del Angelito”, made by the Chilean artist Arturo Gordon, which is part of the personal collection of paintings of the former President. A painting that, in addition to its great artistic value, portrays a culture deeply rooted in the Chilean countryside. 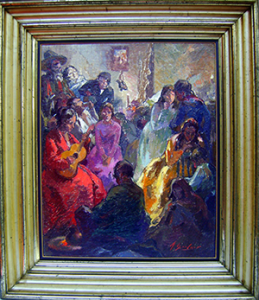 During his life, Eduardo Frei Montalva had a great interest in art in general and painting in particular, which is evident today when we visit his house on Hindenburg Street, a space that shelters an important part of his collection of original works. Many of them gifts and others acquired directly by him, all with a great historical and artistic value. Nonetheless, there is one in particular that reflects a scene typical of the national folklore: “The Velorio Del Angelito” by Arturo Gordon.

But let’s move back a bit on the subject. According to declarations made by his acquaintances, it was customary that Eduardo Frei Montalva, moved by his love to the arts, visited antiquarian houses, especially in search of works focused on rural landscapes (1). In fact, in the collection of paintings that today exhibits the House Museum stands out the different portraits, landscapes and scenes of typical customs of the Chilean people.

In that context, the former Minister Enrique Krauss says that the former president, admirer of national and Latin American artists, tried to get the work “Coche de tercera clase” (Third class car) by Arturo Gordon, however, his purchase was not possible. Knowing this desire, was that at the end of the government of Eduardo Frei Montalva in 1970, his cabinet presented to the President “Velorio del Angelito” (Little Angel`s vigil), another work by Gordon (2) that portrays a custom very rooted in the Chilean countryside, which was very popular in our country until the twentieth century, through expressive brushstrokes and vibrant colors.

It is worth mentioning at this point that the Chilean painter made more than one painting around the vigil of the little angel, creating a trilogy that is currently preserved in the Painting Collection of the House Museum of EFM, in the gallery of the University of Conception and in the National Museum of Fine Arts in Santiago, the two with the same image, only differing in their dimensions (3).

What is the Angel’s Vigil? 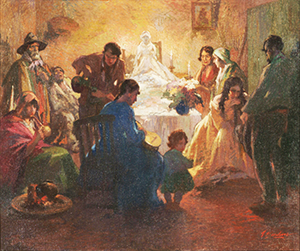 This custom is a funeral ceremony of a popular folkloric tradition, which, although it is original of Spain, also developed in Chile and with certain variations in other countries of South America. It consisted mainly on providing a funeral service for children who died at an early age before reaching the age of three, although sometimes due to the high infant mortality rate, it was performed to children up to seven years. They were called “little angels”.

For the ceremony the child was dressed completely in white and with wings, simulating the image of an angel, then left on an altar, standing or sitting, next to flowers and religious images. A party was prepared, where singers were greeted at home to greet the newly deceased with songs, music and dances, on which singing to the divine is performed, where mainly religious themes with poetic bases were addressed. The meeting was accompanied by a dinner for all the people who were going to wish him farewell, mixed with constant prayers and songs throughout the night until dawn, at which time the final farewell was made. Sometimes the singer or poet would take the voice of the child pretending that he said goodbye to his family, then ending with the journey of the “little angel” to the cemetery.

I left glory in memory,
and these reasons here,
of who does not cry for me,
because it takes away the glory.
You as lady and mother
ask God to keep you
I’m going with the high father
and to the reigns of God.
I say with the heart
and goodbye my dear mother (4).

When a child died, it was believed that this one would go directly to the heaven, ascending with its innocence and purity free of sins. Since this was a celebration, it was forbidden to cry, since doing so would impede the direct path to heaven (5). 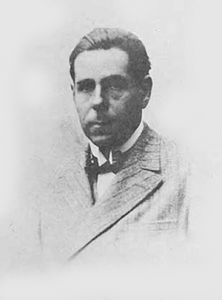 Although over time this tradition was becoming less common, in some places of the Chilean countryside it persists with modifications, replacing for example the wings and the suit by a coffin next to the floral arrangements. In addition, it should be noted that infant mortality rates have declined considerably compared to past decades and that people’s life expectancies have increased, thus reducing wakes at an early age. However, until today, poetry is conserved in the songs, using them to praise all the saints of popular religiosity (6).

These subjects of the popular world and scenes of marginalized sectors, were transferred to several paintings, being chosen by Chilean artists who approached them in their works, as already mentioned Arturo Gordon, and also Exequiel Plaza, Laureano Guevara, Agustín Abarca, Enrique Bertrix and Pedro Luna, among others, who chose to capture the reality in which they were inserted and shared daily.

Many of them were part of the so-called “generation of thirteen” (7), formed mostly by people born at the beginning of the last decade of the nineteenth century, who shared similar living conditions and came from the middle class. Much of it studied in the School of Fine Arts in the 1900’s, under the teaching of the Spanish citizen Fernando Álvarez de Sotomayor, who was a key person in the lives of future painters, being of great influence for his later works.

Precisely, they all shared in their works a preference for social landscapes, scenes of rural world and the social question. The Chilean costumes style that attracted attention for its lights, fillings, colors and shapes.