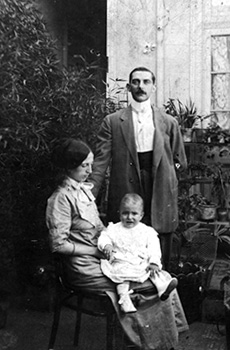 In 1914, his family moved to Lontué, where his father had been contracted as an accountant in a vineyard. In addition, his other two siblings, Arturo and Irene, were born. He attended the Escuela Pública de Lontué (Public School of Lontué).

In 1919 the family returned to Santiago and Eduardo, as a young man, entered the boarding School Seminario Conciliar de Santiago where he remained until 1922.

As an 18 years old, he entered Universidad Católica School of Law in 1929. By that time, the family lived in Jofré Street, located between Lira and Carmen Streets. For two years, he had been visiting María, the sister of his friend, Alfredo Ruiz-Tagle.

He entered Asociación Nacional de Estudiantes Católicos, (National Association of Catholic Students) where Oscar Larson stood as chaplain. In 1930, the magazine of catholic students (REG, in Spanish) was brought out. Eduardo Frei Motalva’s first article was published in the magazine’s second issue.

Apart from collaborating on the magazine, Eduardo Frei Montalva taught evening classes after his study hours at the university.

In 1931 he was appointed General Secretary of the Acción Católica and as master of ceremonies for the first Semana Social de Chile. At the age of 20, he lectured at his first conference on The Christian Social Doctrine.In the political scene at that time, the Presidency of Carlos Ibáñez del Campo collapsed in June 1931. Subsequently, Juan Esteban Montero was elected President, in December of the same year.

The collapse of Montero’s government was followed by the brief Socialist Republic of Marmaduke Grove, 1932, and finally with the return of stability and of legitimacy with President Arturo Alessandri Palma. 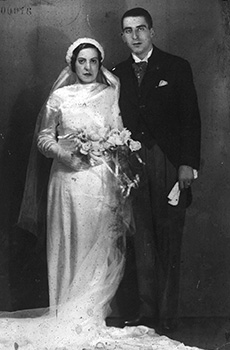 In 1933 he finished his Law studies with his thesis “The Salary-based Regime and its Possible Abolition”. He received his law degree on October 27th, 1933. Furthermore, the University’s Superior Council decided by unanimous consent to award him the Gran Premio de Honor. Later, he was appointed assistant professor in the subjects of Political Economy, and also he was an associate professor of Labor Law.

Frei traveled to Rome to attend the Congreso Iberoamericano de la Juventud Universitaria Católica (spanish-speaking congress of young catholics from universities), of which he was appointed General Secretary. There, he met Giovanni Papini and visited other cities in the country.

Then, he visited Spain where he meets Gil Robles and the Nobel Prize winning poetess Gabriela Mistral. Afterwards, he moved to France, and attended conferences, in Paris, of which Jacques Maritain was a participant.

In mid-1934, Eduardo Frei Montalva returned to Chile, entered the Juventud Conservadora (Conservative Youth) and wrote for “El Diario Ilustrado” newspaper. In the same year, he was appointed chief editor of the “Diario El Tarapacá” newspaper in Iquique, where he stayed until 1937.In April, 1935, he married María Ruiz-Tagle Jiménez in the Capilla del Instituto de Humanidades.

The same year, between October 11th and 13th, the Falange Nacional was born out of a gathering by the Juventud Conservadora in Teatro Princesa.

In 1937, he stood as a candidate for Representative to the Parliament in Tarapacá province. He was defeated. On his return to Santiago, he published his first book “Chile Desconocido” (“The Unknown Chile”). He became a member of the Board of Directors of the Conservative Party. Before the 1938 presidential elections, the Falange Nacional Party gave freedom of action to its members, which led to its dissociation from the Conservative Party, and therefore, its rise as an independent party.

In 1940 he was elected president of the Party, a position he mantained until 1946.

He published one of his fundamental books “La Política y el Espíritu” (“Politics and Spirit”). 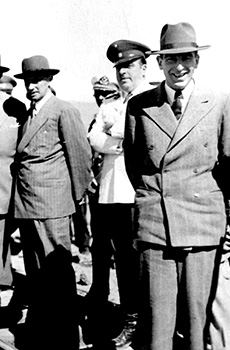 In 1942, his third book “Aún Es Tiempo” (“It Is Still Time”) was published. He continued in his position as assistant professor of Labor Law at the Universidad Católica Law School.

In 1945, he was named Minister of Public Works and Communication Routes by President Juan Antonio Ríos, at the age of 34. In early 1946, he left his position as political events resulted in the deaths of three laborers.

In 1947, the First World Christian Democrat Party Meeting gave its support to the Falange Nacional Political Party. In December, Frei summoned an Extraordinary National Congress strengthening the existence of the party with the participation of Monsignor Manuel Larraín Errázuriz.

In 1949, Frei was elected Senator for Atacama and Coquimbo. He published his latest book “Historia de los Partidos Políticos Chilenos” (“History of Chilean Political Parties”) in colaboration with Albert Edwards Vives. In 1950, he traveled to New York as a UN delegate. In 1952, at 41 years of age, Frei Montalva announced his candidacy in the presidential elections.Carlos Ibañez del Campo was elected President. Later, he would request Frei to organize an executive committee. However, this never came to be. In 1954, the UN appointed him President of the Commission in charge of elaborating the report of the Conference of Chancellors held in Rio de Janeiro. Some of its members were: Carlos Lleras Restrepo, former President of Colombia, and Raúl Prenisch director of ECLAC. The report served as a basis for subsequent studies on economic development and the integration of Latin America.