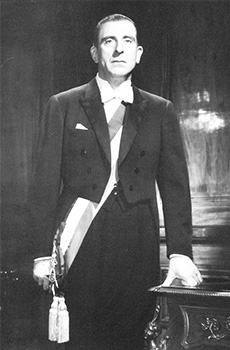 In 1960, he lectured at conference “The Mission of Universities in Latin America” in Montevideo; a widely promoted conference at that time.

In 1961, he was elected President of the First World Christian Democratic Party Congress, held in Santiago, Chile. The congress was attended by delegations from throughout Latin America, European, North American, and African countries.

That year he was invited as special guest to a seminar on the problems of Developing Nations, held at Oxford University. The seminar was attended by delegates from all over the world.

On September 4th, 1964, having one of the highest turnouts in Chilean history, Eduardo Frei Montalva was elected President of the Republic of Chile. He then, took office on November 4th of the same year.

In 1965, he started a presidential tour through France, the United Kingdom, Federal Republic of Germany, Italy and the Vatican. During this time, he also visited countries in Latin America such as: Argentina, Brazil, Uruguay, Colombia, Peru, Ecuador, and Venezuela; places where he delivered important speeches on international issues.

On his return, he initiated important plans involving housing, education, reforestation, land reform, health, and the nationalization of copper. 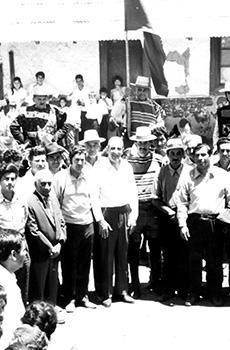 1966 is the year of the Andean Group, officially created through its Declaration, signed in January 1965. However, the group culminated with the famous speech delivered by Eduardo Frei Montalva in Plaza Bolívar, Bogota. The same year the pacts on Chilean copper are signed.

In January, 1967 the National Congress refused his constitutional permission to travel to the United States where he has been invited by President Lyndon B. Johnson. In April, he participates in the Meeting of Presidents from American countries, carried out in Montevideo, Uruguay.

In 1970, he was awarded with the Doctor Honoris Causa title by the Pontificia Universidad Católica de Chile.

On November 4th, he left office, handing over the Presidency to Salvador Allende Gossens.

In 1971, he gave conferences at universities in Dayton, Ohio, Boston, and the Council of the Americas in New York. In the 1973 parlamentary elections he was elected Senator for Santiago by a first majority. He was also appointed as President of the Senate. He published a new book entitled “Un Mundo Nuevo” (“A New World”)

On September 11th, 1973, after the coup d’etát, the Armed Forces rose to power; President Salvador Allende commited suicide. The Parliament was disolved and the political parties were left in recession.

Between 1973 and 1977, Eduardo Frei Montalva was invited to different countries and participated in conferences, such as: The Altlantic Conference in 1976. 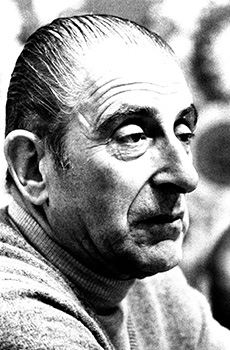 In 1975 he published his book “El Mandato de la Historia y las Exigencias del Porvenir” (“The Mandate of History and Demands of the Future“), and in 1977 his quintiessential book “América Latina: Opción y Esperanza” (“Latin America: Option and Hope”) which has been translated into several languages.

In the period between 1977 and 1982, he was invited to participate in the Brandt Comission, led by Willy Brandt. As a member, he attended meetings held in Germany, Switzerland, Mali, United States, Malasia, France, Austria, Belgium, and Great Britain. As a Brandt Commission delegate he engaged with important executives from IDB, OAS, and ECLAC.

In 1980, he participated in the Meeting of Former Democrat Presidents of Latin America held in Caracas, Venezuela.

In 1981, he was invited to the Club of Rome International Conference on the “Alternatives for Humanity: Latin America Mission” also held in Caracas. His last book “El Mensaje Humanista” (“The Humanist Message”) was published.