The object of the month: The student

The university years of Eduardo Frei Montalva, not only allowed him to develop professionally, but also to forge a vision of the world that was reflected in his political career. A step that culminated when the 27 of October of 1933 received his diploma of laws and the Great Prize of Honor for being a highlighted student at the Pontifical Catholic University of Chile. In our object of the month of the month of August, we approach those student years. 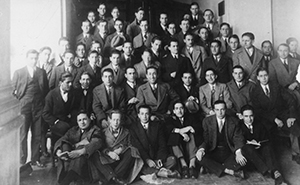 By the end of the secondary education, those who wanted to go to university had to take the Baccalaureate: a test of knowledge that was the nightmare for all graduates. Eduardo Frei Montalva approved it with an average of 6.6 with mention in Letters. Of course the next step was the most complex: choosing a career. During his vacations he reflected and considered that the best option was to study Laws, although the desire of his family, and also his, was to study Medicine.

A factor of weight in this decision was the economic situation of his parents, it was not serious, but narrow, and Eduardo needed to study something that allowed him to study half a day and work in the evenings, to contribute in something at home and to pay some of his personal expenses.

In 1929 he began his days as a student at the Pontifical Catholic University of Chile, where he was known by his classmates as “El Flaco” Frei. In his new life as a university student, he also worked in his former school (Institute Luis Campino) as a teacher of Spanish, history and geography for high schools, where he gave very good memories to his students (1). And as Frei Montalva told in an interview, he got 36 hours of weekly classes.

The ANEC and their interest in politics

The most important place to socialize after classes at the University was the National Association of Catholic Students (ANEC). This institution was created in 1915 and the idea was to be the counterpart of the Federation of Students of the University of Chile (FECh), as a reference for the young Catholics of both universities.

In the decade of the 20`s the ANEC, was concerned of the organization of the Festival of Spring and fulfilled more than a whole role in the generation of bonds between the young people, losing the force that could have like a center of university discussion. These spaces of discussion were important, since when Ibáñez del Campo was in charge of the country, the political parties were banned and the young sought moments to be able to discuss, being the ANEC the center in which the young could be formed spiritually and morally, besides Social problems (2).

Eduardo Frei Montalva felt that he had an exciting life between studies, work and the ANEC: “When I finished the morning I would go back to my school and there I would start teaching my classes and my work in the administration office. After 6 p.m I went to the ANEC, where I felt in community with those who looked at Chile and the world with a similar perspective. It seemed to us that we were preparing the future, discussing the fate of our ideas, of the profound reforms we believed to be urgent and necessary. Despite all this trouble, it was methodical and I always came to my house to eat with my family, study later and go to bed early to start the new day tomorrow” (3).

Little by little the ANEC intensified its “action in the social field”(4). In 1929, the organization participated in the National Eucharistic Congress, in Valdivia. There they met with some provincial delegates and agreed that it was necessary to organize youth centers covering all sectors. So the participants of this idea collected 140 pesos to finance a trip that began in the south, and his objective was to form the first groups. The trip was made by Frei Montalva, since he was elected secretary for the provinces.

With the 140 pesos he bought a ticket in third class and travelled Puerto Montt, Osorno, Temuco and Chillán. When they arrived to the provinces and met with members of the associations he had to visit, they looked at him with distrust, since at age 19 they found him just a little boy, but the young people received him enthusiastically and managed to leave the first centers formed. This action was replicated almost in all the provinces, from Valparaíso to the south of Chile.

While continuing its routine dividing between the studies, the work and the ANEC, the political and social climate in Chile entered a state of boiling. While Ibáñez Del Campo, in his mandate, prohibited that political parties and other restrictions were generated, people began to organize to end this regime. The groups that began to oppose the government were the professional colleges, especially those of doctors and lawyers. And in June of 1931 the assemblies reunited a great number of students.

The ANEC also participated in these processes and although that at the beginning they declared themselves without any political tendency; there were meetings with their FECH peers in which the popular voice was to end the ruling government.

These meetings took place in July 1931, when the students of the University of Chile, led by Julio Barrenechea, took the Central House of the University of Chile, while the students of the Pontifical Catholic University, led by Bernardo Leighton and Eduardo Frei Montalva did the same. The movement had a great popular support and was climbing until July 24 died a medical student, fact that added the protests to the Medical College and the next day, with the death of Professor Alberto Zañartu, was added the College of Teachers In addition to other guilds.

As a result of these acts of violence, and the loss of support from his cabinet, Carlos Ibañez Del Campo handed over the charge on July 26. It was followed by a new election process, where several groups came together to proclaim Juan Esteban Montero as their candidate. 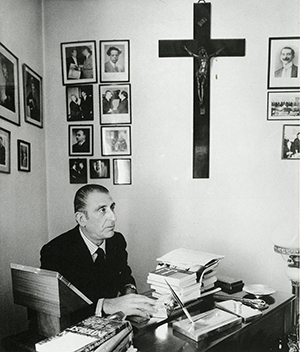 This is how Montero brought together almost all a university youth who supported his candidacy and for Frei Montalva meant his first political activity within a campaign: to run the campaign in the Province of Osorno. It was considered the most optimal for this task, since he had visited several sectors when performing the youth centers in 1929, but this time, he had to meet with the leaders of the radical and democratic parties.

Thanks to the efforts of all his adherents, on December 4, 1931 Montero was elected president.
While Frei Montalva worried about his work in the campaign, he continued to study and work to live and help at home. And to this is added the activity in the ANEC, a work that was intensified more and more, since now there was a publication, the REC magazine, which had to be published periodically.

A special edition of October, 1931 caused a disturbance. This number had six essays that reproduced summaries of the text of the lectures that were dictated in a theater of Santiago, where Eduardo Frei Montalva dictated the first of them: “Origin and cause of the social question”.

Because the issue of the magazine in general was the social question, present in the partisans of social-Christianity, a political current linked to Catholicism that was shunned by the most conservative sectors of society, but which attracted interest in the younger and conservative spheres that where a little less traditional.

In his Memoirs, Eduardo Frei Montalva comments that all this work overwhelmed him, so in late 1931 he was very sick. After two months of complete rest he recovered and in 1932 he finished his university studies, also beginning his professional practice in the study of José Ramón Gutiérrez: Civil Law professor, cabinet chief in the government of Ramón Barros Luco and honorary president of the Party Conservative (5).

As a graduate student, the ANEC organized a tour to the province of Antofagasta during the 1933 vacation, where several groups of youngsters were inviting them on a recurring basis. These groups were led by Edmundo Pérez Zujovic (6), whom he only knew by means of his brief but ingenious letters. The idea of this visit was to extend the centers of Catholic Action and for that public conferences were promoted with open debate. They gave six lectures and each one had a public superior to the thousand people (7).

When he returned to Santiago, his routine was waiting for him, adding to the assistantships in the Philosophy of Law and Economic Policy, as well as preparing his degree and his thesis: “The salaried regime and its possible abolition.”
On October 27, 1933 his efforts were rewarded by obtaining his diploma of lawyer. But he also received recognition from his peers when the University’s top council awarded him the Grand Prize of Honor (8).