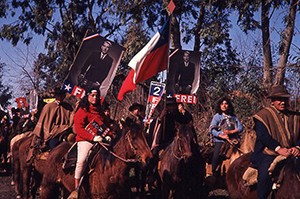 The Land Reform was one of the most controversial and important process in Chile during the twentieth century. It was a policy covered by three governments that changed the face of the Chilean rural farm life forever, and led our country into the practices of the modern economy. Casa Museo Eduardo Frei Montalva recovers some of the main milestones of this period through a dynamic exhibition which includes unknown photographs, press cuttings and documents of the time.

The exhibition “Land development: Frei Montalva and the Land Reform” has free admission at Casa Museo, the place where the ex-President lived with his family, located at Hindenburg 683 (Providencia). The exhibition focuses on one of the main ideas of Eduardo Frei Montalva’s government, who took on the charge of implementing the Law 15.020 enacted in 1962 by the president Jorge Alessandri. During Frei’s period, two laws were created to strengthen the process: the Law 16.640 in 1967 and Law 17.280 in his last year of government.

This remarkable reform allowed the expropriation of lands with more than 80 hectares of cultivable land, other lands of any size that were not well administrated in terms of production, and derelict lands. The expropriation of some lads was justified due to the social injustices experienced by farmworkers who were not protected as the State established. On the other hand, the Farmer’s Union was regulated, giving the rights as regular workers to thousands of people that were still developing their activities under the ideas from the colonial period without any kind of working regulations.

This draft bill was recorded on the Eduardo Frei’s Government Program, where he reasserted his main objective of “modifying the current system of land’s possession, giving the farmworker the possibility to be landowner and increasing the agricultural production (…) An organized farming community will supply food for Chile. It will be a market for our industries. It will be equally part of our nation and its advantages; it will contribute to the wellbeing, the social peace and the common progress with its supportive contribution (…) my Government will raise the agricultural salaries, and these salaries shall be paid in cash. It will increase the family allowances and the Housing Plan will reach to the farm-working family (Chile 1964-1970).”

The exhibition “Land development: Frei Montalva and the Land Reform” shows different milestones of this reform, its historical antecedents, the proposal of Frei’s presidential election campaign, the role of the peasantry in the success of the process, the regulations that supported it and its consequences, among others. All this represented by an interesting exhibition about an historical process that meant a significant land development.