Book about Antonio Smith is launched at House Museum

The book Antonio Smith ¿Historia del paisaje en Chile? (Antonio Smith, History of landscaping in Chile?) will be launched on Thursday, March 12th at House Museum Eduardo Frei Montalva. The book was created by Universidad Católica de Temuco (Catholic University of Temuco) and financed by the Consejo Nacional de la Cultura y las Artes (National Council of Culture and Arts), according to its line of support to editions, 2014. 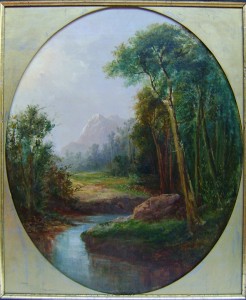 Talking about Antonio Smith isn’t just talking about a Chilean painter. He was born in 1932 and was a landscapist, engraver and the first Chilean caricaturist. He stood out as a member of the then incipient Academia de Artes de Chile (Chile’s Academy of Arts), which led him to be in a permanent conflict with his masters and, to become the creator of the landscapist school of the country and master of important national artists such as Pedro Lira.

As a way of compiling and adventuring into an archeology of the artist’s discourse, through the exploration of many of his works, the Dirección General de Investigación y Postgrado de la Universidad Católica de Temuco (General Direction of Research and Postgraduate studies at Catholic University of Temuco), with the support of Consejo Nacional the la Cultura y las Artes (texts edition line, 2014 call), created the book Antonio Smith ¿Historia del paisaje en Chile? (Antonio Smith, History of landscaping in Chile?). The work will be launched on Thursday, March 12th, at the audiovisual room of House Museum Eduardo Frei Montalva, at 4 p.m.

In the book, the authors Samuel Quiroga and Lorena Villegas, both academics from Universidad Católica de Temuco, offer a revision of the tales and mythical stories that have arisen around this painter’s personality. Also, it contains a complete cadaster of his works, which are currently distributed in public and private spaces.

The presence of the artwork “Paisaje”, by Antonio Smith, is precisely one of the reasons to hold the launching of the edition in House Museum EFM. This art piece is part of the paintings collection of Eduardo Frei Montalva, which includes works by distinguished national and international artists, such as Pedro Lira, Arturo Gordon, Nemesio Antúnez, Oswaldo Guayasamín and, of course, Antonio Smith, among others. It is worth to mention that many of these works are currently exhibited on the original walls of the building.

“The most complex exercise of this research has been to put together the cadaster of the artist’s works, kept in the different collections within Chile. The task of ‘bringing back to life’ the absences, makes a historiographic continuity possible; since important findings have been discovered through the cadaster of these works, which are now available to specialized audiences”, noted the Art History and Theories PhD candidate from Universidad de Buenos Aires (Argentina), Samuel Quiroga.

Along with participating in the launching activity of the book Antonio Smith ¿Historia del paisaje en Chile?, the attendants will be able to take a tour through the two stories of the house, the former president and his family lived in for more than 40 years. In the place, which is open to the community, a permanent collection of over 350 patrimonial and historic objects is kept. The objects are organized just as they were in the times when the Frei Ruiz-Tagle family inhabited the house. The collection includes the former president’s personal library, with more than 3.700 books, a collection of Chilean and Latin American paintings, wardrobe from the 60s, numismatics, European and Latin American medals and even moon stone fragments, which were brought as a present by the first astronauts that landed on the moon in 1969, among other items.