With a focus on the oceans and their importance, the XI Science Festival organized by CONICYT’s Explore Program will be held on 7 and 8 of the month of October in the Metropolitan Park. The House Museum of Eduardo Frei Montalva will participate with a stand, contests and historical data on the development of science in Chile. 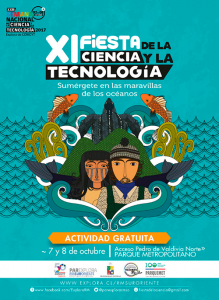 Did you know that the oceans cover 71% of the Earth’s surface? An extension that keeps in its depths a fascinating world, full of natural riches and discoveries. In order to go deeper into the subject, the XI commemoration of the festival of science of the proyect explora Conicyt invites you to participate free of charge in a series of multidisciplinary activities, and to know the riches that exist in our sea. At the meeting, which will be held at the North entrance of Pedro de Valdivia at the Metropolitan Park of Santiago, the House Museum of EFM will participate actively.

This traditional meeting, which last year summoned more than 12 thousand visitors, promises to amaze visitors of all ages with outdoor panoramas, scientific workshops, contests and entertaining themed tents with interactive spaces presented by around 50 institutions linked to the scientific, technological, educational and cultural activity of the country.

In that context, the House Museum of EFM will make its contribution from history, reviewing issues such as the creation of the National Commission for Scientific and Technological Research, CONICYT, whose decree was signed in 1967 under the government of Eduardo Frei Montalva, with Juan Gomez Millas as Minister of Education. An idea that added to a series of international agreements of scientific reciprocity that materialized during his government, besides investigations and commemorations like the Day of the Chilean Antarctica, declared the 6 of November of 1965.

The traditional Science and Technology Festival will be held on Saturday, October 7 and Sunday, October 8, in the Metropolitan Park of the city of Santiago (access Pedro de Valdivia North), from 10:00 am to 7:00 p.m.
It should be noted that the activity is carried out within the context of the XXIII National Science and Technology Week, carried out by the Regional Associative Project, PAR Explore of CONICYT, located at the South East of the Metropolitan Region, implemented by the University of Chile.

XI Science and Technology Festival 2017
Where? : Metropolitan Park of Santiago (Access through North of Pedro de Valdivia).
When? : Saturday 7 and Sunday 8 October.
At what time? : From 09:30 to 19:00 hours.
More information on www.explora.cl