The House Museum of EFM Celebrates 15 Years of Midnight Museum

A journey to the 20th century with guided tours through the building, where the former Chilean president lived with his family. An event with live music, the exhibition “Faces of the Reformation”, contests and surprises. The House Museum of Eduardo Frei Montalva joins the party of Museums of Midnight on Friday, October 13, from 18.00 to 00.00 hours. Free entrance. 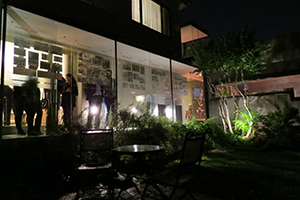 Museums of Midnight celebrate 15 years this Friday, October 13, with activities in museums, cultural centers and patrimonial tours in the north, center and south of the country. A great cultural event that House Museum Eduardo Frei Montalva will once again join as part of the Providencia circuit in Santiago, giving the visitor an intimate journey into the history of the 20th century in Chile.

The property, declared a National Monument in 2005, was built by Eduardo Frei Montalva in a land that he acquired in 1937, and which grew with enlargements as new members arrived. A space that witnessed the life of his family, but which also houses a series of facts and objects linked to the future of the country during the last century.
The guided tours of the two floors of the house of EFM, will be held continuously between 18:00 to 00:00 hours, knowing in this way, places like the library room known as “La Moneda Chica” (The little coin), where Frei Montalva met important representatives of the national and international political, intellectual and cultural world, and even with the astronaut Neil Armstrong, the first man to walk on the moon.

Visitors will also experience a close up to the story of Queen Elizabeth II’s visit to Chile in 1968, at which time she dined at the home of Eduardo Frei Montalva. A memory that remains today, with the table set as it was that day, in a meal that departed from established protocols.

It is worth mentioning that the House Museum of Eduardo Frei Montalva also has a collection of more than 350 heritage and historical objects, including a personal library with more than 3,500 books, a collection of Chilean and Latin American paintings, costumes from the 60s, numismatics, European and Latin American decorations, and even lunar stone fragments brought by the Apollo XII crew in the 1970s.

To soften the festive cultural day, the trio “Callejas”, composed by Catalina Bolton in accordion, Vivian Carvajal in guitar and Nelly Avello in violin will be presented live at the garden of the House Museum of EFM. With open functions at 8:00 p.m. and 10:00 p.m. No prior registration is required and entry is released.
In addition, visitors will be able to approach the “Faces of Reformation” exhibition, a photographic tour through scenes from one of the most controversial processes of the 20th century, the Agrarian Reform, with images of its protagonists: the peasant population.

To the activities of the House Museum EFM for Museums of Midnight 2017 are added, as is tradition, competitions throughout the day. The winners will receive copies of the books “Chile Desconocido” (Unknown Chile) and ” El Mandato de la Historia y las Exigencias Del Porvenir” (The Mandate of History and the Requirements of the Future), written by Eduardo Frei Montalva in 1937 and 1975 respectively and reissued in 2012. Copies of the DVD will also be delivered with videos of the time, rescued and digitized by the crew of the House Museum of EFM and the National Cineteca, thanks to the support of the National Council of Culture and the Arts.

More information about Museums of Midnight 2017 at www.museosdemedianoche.cl