Patrimonial facades: to observe, to project and to construct

The workshop organized by the House Museum of Eduardo Frei Montalva is inspired by the remembrance of facades of historical houses and buildings of Santiago. Every Saturday in October. Free registration, limited space. 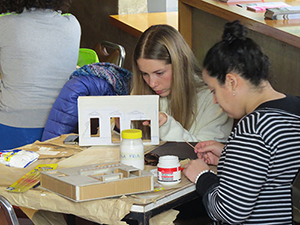 The cities live processes of constant change, generally reflected in the constructions that it contains. Particularly in the city of Santiago, the houses of continuous facade gave way to back gardens, then to small buildings and increasingly larger buildings. However, some of these buildings persist, keeping with them physical parts of the history of each neighborhood. In order to highlight and reflect on the city’s heritage, the House Museum of Eduardo Frei Montalva organized a new version of the workshop “Patrimonial facades: A piece of History”, which will be held free of charge on Saturdays 7, 14, 21 and 28, in the month of October, 2017.

The workshop is in charge of the visual artist Leonardo Portus, who for years has based his work on themes such as architecture and memory, researching for it emblematic places of the city.

In the context of the activity, focused on people older than 15 years, participants will work with cardboard, model sticks, cold glue, paint and brushes, among other elements, to recreate the facade of a house they consider representative of their neighborhood or the sector they choose to observe. For that, in the first of the four classes that will be held in the cultural space located at Hindenburg Street #683, Providencia, will have to take a photograph of the place that will become a facade.

Maite Gallego, vice-director of the convening institution, points out that the workshop “is part of theactivities that the House Museum offers permanently free of charge to the community. In this case we wanted to make a call to observe and value the heritage of the neighborhoods that make up a city, its diversity, its cultural heritage, as a source of inspiration for the production of facades in a small format.”

For his part, Leonardo Portus invites: “Architecture, heritage and personal history of each student is the theme that brings us together in this workshop, open to all types of public. An entertaining instance to meet and experience with our creativity and craftsmanship”.

The workshop “Patrimonial Facades: A piece of History” is part of the extension activities of the House Museum of Eduardo Frei Montalva, the only House Museum of a former Chilean President, declared a national monument in 2005. Entries are free (limited seats), and reservations are made through the mail contacto@casamuseoeduardofrei.cl / (56 2) 2881 8674.

Patrimonial Facades Workshop: A part of History
When? Four classes. Saturdays 7, 14, 21 and 28 of September, 2017. From 3:00 p.m. to 6:00 p.m.
Where? At the House Museum of Eduardo Frei Montalva, located at Hindenburg Street #683, Providencia.
Aimed at men and women aged 15 and over. Participants should bring to the first class the printed photograph of a facade of any house, building or church that interests them to work. Where possible related to some personal experience.
Entries: contacto@casamuseoeduardofrei.cl / (56 2) 2881 8674.
Free activity. Limited seats.