Object of the month | The EFMHM Audiovisual Material

Museums are institutions that have significantly evolved in recent decades. They left that idea of museums as repository of objects displayed in showcases behind, to generate a new lively and dynamic concept, where collections are still a substantial part of museum’s tasks and incorporating work areas like conservation, research, education, and interaction with communities and expanding their horizons to new notions of heritage, such as intangible heritage.

“Museums ensure the protection, documentation and promotion of
Humanity’s natural and cultural heritage”[1]

Even though a collection of objects is, in general, the reason why these entities are constituted, the historical files have been incorporated as part of the work of protection, study and dissemination carried out in museums.

Thus, Eduardo Frei Montalva House Museum, in its constant work to spread the life and vocation of public service of the former Chilean president, has not only worked on the enhancement of what was his residency, but also with three historical materials: documentary, photographic and audiovisual, covering different moments of his private and public life.

This April, we want to highlight our Audiovisual Material. We will talk about its origin and the work that we have done with this interesting and valuable material during our first ten years as House Museum.

Origin and characteristics of film material

During the presidency of Eduardo Frei Montalva, there was an important amount of audiovisual material about the advances of the government’s works: the President of the Republic, the First Lady, ministers or other authorities’ activities; the enactment of emblematic laws, recordings of the everyday life of the city in those years, trips abroad and summaries from special programs aimed to explain some of the reforms promoted by the government, such as Land and Educational Reform, Social Promotion, Chilean Nationalization of Copper and a series of moments that were considered as relevant for the citizens. 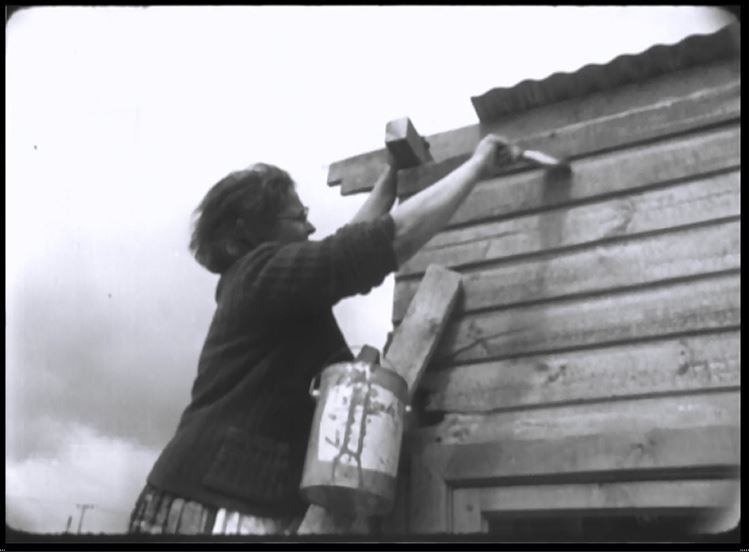 One of the state policies of the time was to promote the development and coverage of communications. Being considered as driving force for change, social development and pillar of democracy by the Christian Democracy government, this film material constituted one of the diffusion mechanism of the period (1964- 1970) and were projected basically in cinemas, since television still had limited coverage in households, with only 174 thousand televisions in the country in 1967.[1]

Due to the characteristics of film technology available in the 60s, most of this material was recorded in rolls of 16 mm acetate, in white and black and without sound, being recorded and edited for its exhibition in cinemas by Chilefilms Company.[2]

After the presidency of Frei Montalva in 1970, part of this material, edited or not, was left in the hands of the former president and after his death in 1982, his family decides to transfer it to the foundation that would come to bear his name and would be founded that same year with the mission of housing the legacy of the president.

Thus, hundreds of celluloid tapes remained stored for decades in Eduardo Frei Foundation’s repositories until, in 2007, the foundation, in a first stage, delivers part of this material to the National Film Library with the aim of transferring the material for safekeeping, in the pertinent conservation conditions that institution provides, like air-conditioned vaults, among others; in addition to making it available for the citizens through a public institution specialized in this type of patrimonial collections.

Specifically, two lots of boxes with recording tapes, made between 1964 and 1970, were transferred in 2007 and 2012 in the context of the agreement signed (2012) between the institutions with the commitment by the National Film Library to safeguard the material and do the necessary cleaning and conservation tasks at the time of receiving it, in addition to inventorying and cataloging it according to its standards and protocols.[3]

As a result of this process, it was found that, in total, the material is around 1,800 registers of the most diverse nature and with different conservation conditions some edited and ready for projection discarded material, shots of landscapes and common people and so on and so forth.

Subsequently, Eduardo Frei Montalva House Museum’s team – institution that safeguard the photographic and documentary archives of the former president – seeking to enhance the film material to which we have referred, submit a proposal for the digitalization of it, together with the National Film Library and thanks to the competitive fund “Support for the protection of film heritage” from the Audiovisual Fund of the National Council of Culture and the Arts. The objectives are to digitalize the film material for investigation and thus avoid deterioration by constant projection or manipulation, and identify the content of audiovisual material for classification.

This way, in 2014, 23 rolls were digitalized corresponding to almost 300 of the 1,800 registers kept in the National Film Library, which are equivalent to almost 27 hours of filming that we have available today in different formats for different types of public and requests we meet, so the House Museum team cataloged and identified the received material.

Of the total revised, 15% corresponds to interviews, 9% to documentaries, 6% to speeches and broadcast advertising and 2% to conferences and to a lesser extent; it is distributed in animation and musical numbers. On the other hand, 40% of the digitized material can’t be classified, since it corresponds to discarded material and/or recording copies without identification context.

Regarding to the place where the images were recorded, 70% of the material was shot in Chile, mostly in Santiago, due to the coverage of presidencial activities, such as speeches, inaugurations, conferences, interviews as well as members of the cabinet activities. About what was recorded in the rest of the country, it is worth noting the work in rural areas, with pannings of men working the land in rural areas, which is related to one of the main lines of Frei Montalva’s government, as the Chilean Land Reform.

Continuing with the location of video filming, 30% corresponds to recordings shot abroad, most of which from the European tour that Eduardo Frei Montalva made in July 1965, visiting Italy, the Vatican City, France, England and Germany. There were also tapes recorded at Punta del Este, Uruguay, on the occasion of the Organization of American States Conference (OEA) in April 1967, among others. 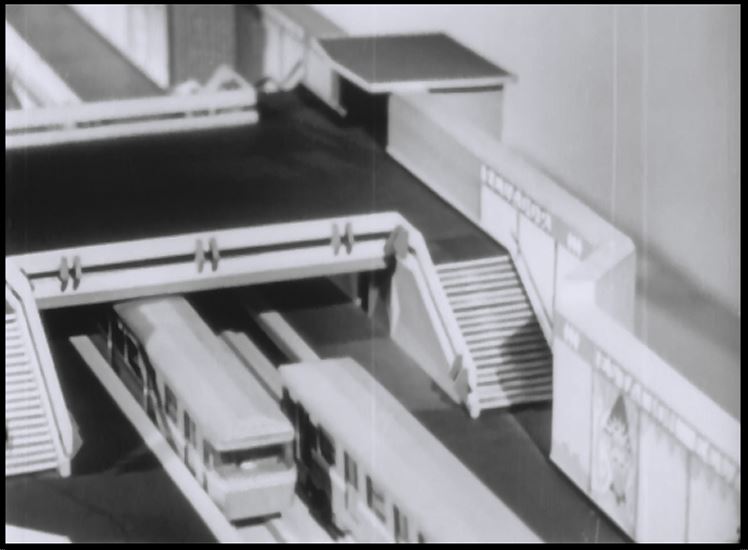 In a special way, we highlight the short films “Chile en Marcha”, which were a continuation of the EMELCO’s news program, being director Patricio Kaulen[4], initiating in 1925 under ChileFilms[5]. The news program was exhibited in movie theaters as short documentaries before the main feature “a subgenre widely exploited during the 20th century, both by democracy and dictatorship”[6]. During Frei’s government they would have been shown fortnightly, first in downtown movie theaters in Santiago and then reach the neighborhoods and different cities in a format of 35 millimeters in color.

These were the news programs digitalized thanks to the project with the National Film Library:

This particular film series was quite successful, being a format valued as a resource in all political sectors. Towards 1973, when Douglas Hübner was in charge of ChileFilms and they were “finishing a classification process of an infinity of audiovisual material from 1942 until that date, which took almost a year”[7], in Chile the military dictatorship began, which triggered a series of interventions in different public and private institutions, context in which “the entire film archive was burned, at least one hundred news programs of Frei’s period”[8].

Other records that we can highlight for readers to get an idea of the material available and its historical value are, for example, the words of President Frei Montalva at the inauguration of one of the urban icons of his government, Villa Frei. Residential complex of 3,818 homes and thirty commercial premises, located in the municipality of Ñuñoa. It was a symbol of the social sense of the president’s project.

We can also highlight the images of the Chilean President’s speech on the twentieth anniversary of the Universal Declaration of Human Rights.

In our tenth anniversary

The digitalization project that lasted the entire year 2014, concluded with the edition of a two-hour compilation of the historical material we have mentioned. It is presented to the community in DVD as “Eduardo Frei Montalva Audiovisual Material. Milestones of his Government”. This compilation contains a series of audiovisual images of the government of Eduardo Frei Montalva (1964-1970), selected with the criteria of representation of the period.

Since its release until today, hundreds of copies of this audiovisual resource have been distributed free of charge to teachers, students and researchers throughout the country in a permanent effort to make this material available to the community. It should be noted that in the same context, House Museum donated 200 copies of the DVD to the National Public Library System (SNBP for its acronym in Spanish) of the Directorate of Libraries, Archives and Museums (DIBAM for its acronym in Spanish), which were distributed to the public libraries that make up the system. Subsequently, House Museum made a formal delivery to the National Library of a copy of all digitalized material, which is now online for all Chileans.

Within our work as a museum, promotors of cultural heritage, our digitalized audiovisual material is partially available for free consultation in our web page, as in our YouTube channel. There, who wish to do so can have access to one third of the digitalized material.[9]

Over the years, dozens of researches, film and television production companies and press media have consulted and requested the use of this material, which is always available, fulfilling the protocols of mention, credits and emission or publication rights.

We hope that this educational material will be a very useful contribution for teachers, students, researchers, academics and the community in general, those who want to know more about the history of Chile and that serves as concrete support to all educational establishments of the country.

In the same way, in our tenth anniversary as Eduardo Frei Montalva House Museum this 2018, we are proud to spread through different ways this important heritage and historical film, not only because it was produced during the government of a Chilean president as part of communicational policies, but because through these images we visited the old times in Chile, our past as a society.

Because they are our memories in movement…