With different perspectives about the 20th century, great movies of French and German cinema are the focus of the new season organized by Casa Museo Eduerdo Frei Montalva in cooperation with the French Institute of Chile and the Goethe Institute. Roger Vadim, Will Tremper, Jacques Besnard and Agnieszka Holland are the directors present in the Summer Cinema Season of Casa Museo: Classic films of 20th century. 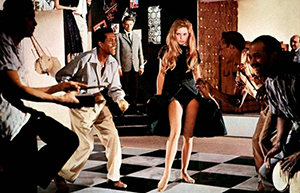 This activity has free admission and brings together great classic films of a series of four movies starting on Saturday 9 of January with “Y Dios Creó a la Mujer” (1956) by the French filmmaker Roger Vadim who gave to Brigitte Bardot the worldwide fame. The actress plays as Juliette Hardy, a beautiful and sexy 18-year-old girl that lives with her legal guardians in Saint-Tropez (France). The plot focuses on the relationship of three men from different social class and different ages, who are all in love with the same girl and would do everything they can to get her.

On Sunday 10th it is time for Will Tremper with the film “La Noche Interminable” (1963), a German film awarded with the German Film Critics Association Awards. The story happens at Berlin Tempelhof Airport, when in the middle of the night, all flights are canceled because of a heavy fog. While all the passengers are waiting for their delayed flights, their everyday stories interweave with tricks and betrayal, lost illusions, destroyed careers, awaiting the morning and the opening of the runways.

On Sunday 16th of January, the French comedy comes from Jacques Besnard and “El Gran Restaurante” (1966), a brilliant comedy that happens in a luxurious restaurant, ruled with military discipline by Mr. Septime. The plot thickens with the arrival of a South American president that visits the restaurant, the owner of the restaurant decides to cook a special dish:  “Pyramid Septime style”, while at the same time the nerves take the staff. Everything takes a turn for the worst when the president disappears.

The cinema season ends with “Europa, Europa” (1990), a Franc-German-Polish international joint production based on the 1989 autobiography of Solomon Perel, directed by Agnieszka Holland. The film is about a young Jewish man who is taken to a Soviet orphanage right after the Second World War starts. Later, this young man is recruited by Germans who don’t know about his identity, so he involuntary became a hero of the Nazi army. The film won the Golden Gold for Best Foreign Language Film and it was nominated for the Academy Awards for Best Adapted Screenplay.

The movies will be exhibited on Saturdays and Sundays, from January 9 to 17 at 16:00 hours in the audiovisual room of Casa Museo Eduardo Frei Montalva (Hindenburg 683, Providencia). The room has air conditioner and the activity has free admission.

Summer Season Cinema at Casa Museo: 20th Century Classics is part of the extension activities organized by Casa Museo EFM, and it is supported by the French Institute of Chile and the Goethe Institute.