From Guayasamín to Juan Francisco González, the travelling exhibition “Landscapes and Characters: Eduardo Frei Montalva House Museum’s Paintings” arrives for the first time to the Central House of UNIACC University (Salvador avenue 1200, borough of Providencia) from May 2nd to 31st, as part of their exhibition agreement. Open to the university academic community and to general public, the exhibition presents reproductions of the most iconic Chilean and Latin American paintings of the 19th and 20th century of House Museum’s collection. 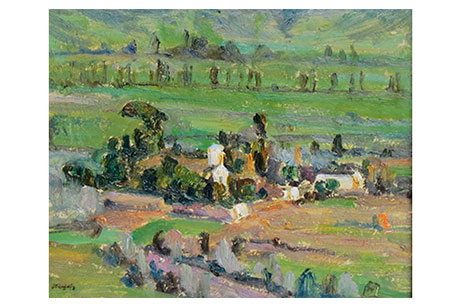 EFM House Museum’s Deputy Director, Maite Gallego, says: “We are pleased to celebrate these four years of agreement with an educational institution of the relevance of UNIACC, expert in the arts and communications” pointing out that – “the most interesting thing about this collection of paintings that belonged to President Frei Montalva, lies not only in having been collected by a former president and one of the most important politicians and intellectuals of the 20th century, but also coming from a place which is different from a formal art space; in this case, it is a heritage house and not an art gallery, that preserves intact the lifestyle of Chile in the 1960s.

Precisely, this activity, which celebrates the fourth consecutive year of cooperation between EFM House Museum and UNIACC University in the line of an exhibition agreement, is one of the first initiatives of House Museum to celebrate the Arts Education Week (SEA for its acronyms in Spanish) 2018. This is a national activity promoted by Unesco, Ministry of Education of Chile and Ministry of Arts, Culture and Heritage, which invites, between May 14th  and 18th , educational establishments and cultural institutions to highlight the arts in education.

At the same time, Daniel Molina, Director of Students Affairs at UNIACC University, says  that: “We are very happy to have Eduardo Frei House Museum in our university once more. This is our fifth exhibition and we hope to continue cooperating on new projects”, and emphasizes that: “The House Museum’s exhibitions at UNIACC University are an important extra-classroom complement, which allows our students to be more and more steeped in culture, art and history.

“Landscapes and Characters” is part of EFM House Museum’s mission to spread the personality, lifestyle and vocation of public service of the former president Eduardo Frei Montalva, through the transformation of his house into a museum of educational and cultural nature, that contributes to awake in the national community – especially children, young people and teachers – the interest and appreciation of the legacy of a former president who brought important values and events to the democratic history  of  nation.

from May 2nd to 31st – Central House of UNIACC University (Salvador avenue #1200, borough of Providencia).
Open to the university academic community and to general public- Free admission
Second floor Crea Room: Library and Digital Resources
Monday to Friday from 8:30 am to 8:00 pm, Saturdays from 9:00 am to 6:00 pm.