The Guayasamín exhibition arrives to the Cultural Foundation of Providencia

A complete exhibition with works made by the Ecuadorian artist Oswaldo Guayasamín arrives at the main hall of the Cultural Foundation of Providencia, thanks to an agreement signed between this entity, the Guayasamín Foundation and the House Museum of Eduardo Frei Montalva. 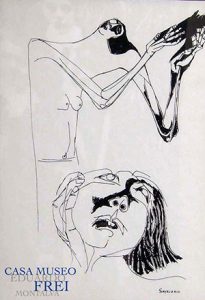 Oswaldo Guayasamín died in Baltimore (United States) on March 10, 1999, but his legacy remains alive, in both continents, in Latin America and worldwide. That is why, thanks to an alliance between the three entities mentioned, an important part of his work will arrive on Thursday, August 9, at the emblematic building of Providencia, located in Nueva Providencia #1995.

The House Museum of Eduardo Frei Montalva joins to the exhibition of 57 works between lithographs and “strong water” drawings of the Ecuadorian artist, with his sample “Guayasamín en Chile: 1969”, created from a series of engravings that belong to his series “The age of rage” (La edad de la ira in Spanish) presented to the Chilean President by the Ecuadorian artist as a gift, in the context of his visit to Chile in July, 1969.

Guayasamín’s visit to our country, at the end of the 1960s, was the result of an invitation from the government of Eduardo Frei Montalva through the Ministry of Foreign Affairs, headed by Gabriel Valdés, to exhibit at the National Museum of Fine Arts. In this context, the outstanding painter and muralist was in Cerro Castillo, where in only two hours he conceived a portrait of the former President, which is currently exhibited at EFM House Museum and whose reproduction can be seen in the sample that comes to Providencia, which also includes information panels and showcases with documents related to the artist’s visit to Chile.

It should be noted that the exhibited works of Guayasamín are part of the collection of the House Museum EFM, a space opened to the community since 2008. A building where the former President lived with his family for more than 40 years in the city of Santiago, where you can see the original portrait made by the artist and where you can also find patrimonial objects, a collection of Chilean and Latin American painting, numismatics, decorations, among others.

Data:
The Art Exhibition of Oswaldo Guayasamín in the Cultural Foundation of Providencia.
Dates: from August 9 to September 1.
Address: New Providence #1995.
Hours: From Tuesday to Saturday from 11:00 a.m. to 7:00 p.m.