“You, the young who have marched…” Patria Joven March

During May, we remember one of the largest attendance political manifestations of Chile’s history. An event given in the context of the presidential campaign of Eduardo Frei Montalva, which gathered together close to 300 thousand people coming from the north, center and south of the country at Cousiño Park.

“You have brought an answer, an answer that is an statement of faith when facing doubt, that is an statement of value when facing cowardice”. With these words, Eduardo Frei Montalva welcomed the crowd of chilean people who assembled on June 21st, 1964- at the then named Cousiño Park ellipse- nowadays O’Higgins Park- that went to the capital to show their support to the candidate for the presidential elections which were carried out in September that year. 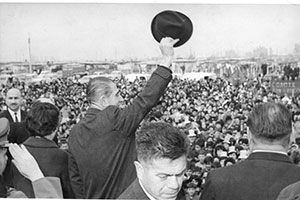 This political manifestation was an event which finished a innovative effort within the Christian Democratic party presidential campaign. From the central command of the party- and with the help of the leaders all over the country- militaries and supporters of that entity were convened, and also anyone who wanted to support Frei in his candidacy, to participate in the march called Patria Joven march (Young Nation march).

Germán Martínez Álvarez, leader of Christian Democratic Youth in the south during the decade of 1960, told that the national command made the march to unify chilean youth from Arica to Punta Arenas, so they would come together in a political act of the masses like never seen before in our country.

The planning contemplated the moving of the attendees in a system of “relays”. That is to say, they would travel by ship to Puerto Montt, stop over in Aysén and then join adherents of the zone. There, as Martínez said, they would leave the task to Puerto Montt people and then return. From there, a new group would depart and pass by Puerto Varas, Purranque, Río Negro, etcétera, until reaching Osorno city. And so on, city by city, the participants would be relieved by a new group of young people until reaching Santiago.

The prominent chilean writer, Guillermo Blanco, describes the initiative in his particular style as:

“…one of those crazy ideas that sometimes show up within the heat of a political campaign. It was about carry out, from different places of the country, a vast movement of young people which between relays and walking, should converge at the capital”.

In the same way, the march of the people from the north area of our country would deploy:

“From the hystorical slopes of Morro of Arica, on May 21th started another deed to the chilean sense. Children peace heroes undertake the route through tough and inhospitable pampas, moved by the force of an ideal and the vocation of “roto chileno”” (a brave, proud, hard-working, and cheerful worker of the rural zone).

Carrying chilean flags, banners, and posters of the candidacy, accompanied by the sound of the bass drum that became an icon of the column, the young were recieved with great bustle by the inhabitants of the cities and countries who met the paths to encourage the participants of this singular manifestation.

However, and despite the arrangement of the march that was made to move following a relay system, the enthusiasm of many young people took them across the country from their hometowns to Santiago, leaving behind the relay and walking hundreds of kilometers to support their candidate no matter what.

“On horseback and with a poncho, Emilio Lorenzini and his people say goodbye to the rain and wind of Aisén.

The road for the ones who ventured to participate in this march was not easy, either for the stretch between cities or make it through the entire path until arrive to Santiago. Taking into account the geography and the diversity of climate of our national territory, this was without a doubt a significant demonstration of the enthusiasm created within the youth before the possibility of showing their support towards Eduardo Frei Montalva.

Whe the column was prepared to arrive the capital, as Germán Martínez told, they receive the invitations for the manifestation scheduled at Cousiño Park, besides the train tickets to attend the event. On the other hand, when the date approached, Santiago people were convened to meet their compatriots, who came on the road and joined to the closure act. Thousands of young people embarked on a train to the capital, added to the ones who have marched and waited on the outside of Santiago, the night of June 20th.

That June Sunday 21th, 1964, the city awakened with the parade of the columns of thousands of young people coming from every part of Chile.

Railway Central Station was crowded because of the ones who came from the south. Outside, on Alameda Bernardo O’Higgins street, the ones of column coming from western zone of the capital will be added.

“…At parade’s pace, as the old thirds paraded due to Cousiño Park, the teather of the great citizen event, to the compass of the unconquerable bass drum…
… And Cousiño Park became a palpitating human tidal wave…”

The numbers of who participated in the walk to Santiago do not exist, we only have the estimate of the ones who went to the park that Sunday of June, and that is 300 thousand people. Yet not being exact numbers, the magnitude of that event was huge, not surprisingly it is considered the largest political concentration of its kind in the history of our country.

Few after noon, Frei went up to the stage ready for the ocassion. He delivered then, very moved, one of his most famous speeches:

“People of Chile: like in the ancient deeds of Chile’s discovery, we have taken position of our Nation, in this great embrace of the North and South.
You, the young who have marched, are much more than a party, much more than an election fact. You are the truly “Patria Joven” (Young Nation) who have moved”.

In this massive event, the candidate presented a government project, which in his own words was announced as “revolution in freedom”. Finally, the candidate said goodbye with an invigorated voice which resounded all across the park, reiterating his excitement for seeing them united and thanking their support with an unforgettable and poetic harangue…

“I saw a kid running and telling his dad:- “There they come”! There they come! They come from Arica! Cross Tarapacá! Go through Concón and Placilla! Look how they ride Chacabuco’s slope! Look the others, how they go through Cancha Rayada, Rancagua and arrive to Maipú! Father, who are they? Are they Christian Democrats?
-No, they are more than that…
-Are they the Frei supporters?
-No, son, much more than that…
-What are they, father?
-Son, don’t you see the flags? They are the same of the year 1810, of the year 1879, of the year 1891. They are the Nation!
Yes, my friends, you are that. You are the Nation. You are the Nation, than God!

With a standing ovation of the audience, the act came to its end, leaving for many people the sense of triumph after September elections, each time increasingly possible. The campaign developed during the next months and the huge signs of support Frei found in every corner of Chile, contributed to reaffirm what happened that day of June at Cousiño Park.

“The crowd won’t take long in being splitted, returning Santiago streets and after, some will be returning the rest of the country. Many of them will have the impression of having attended an special event, a different one. The exultan tones will have the feel of having touch history. Others, maybe, will constrain to find it a “good concentration”, encouraging. Because it is already an habit in Chile to gather this way, festivaly, to express accession to an idea and to the men that assume the hope of every citizen sector.
Nevertheless, for a group, that special thing will be very special and very deep…”