Object of the month: A Queen at the president’s house

In November 1968, Queen Elizabeth II visited Chile, as a sign of support to the then president Frei Montalva, who had the opportunity to receive her in his own home. A series of objects of the House Museum’s collection, maintain the memory of that moment.

Eduardo Frei Montalva was the first Chilean president to go on a diplomatic tour of Europe, which took place in July 1965, thus achieving visibility for Chile at an international level.  France, England, Germany and the Vatican where some of the countries included in the tour. An important moment was the encounter with Queen Elizabeth II and her husband the Duke of Edinburgh during his visit to London.

In our country there was already a history of protocol visits by representatives of the British state, such as Princess Marina’s, aunt of the Queen and Princess Alexandra, in 1959, or the visit of the Duke of Edinburgh in 1962. In addition, Elizabeth II congratulated the then president-elect by sending him a congratulations letter and a representative, Lord Shackelton, when he took office in November 1964.

On July 13th 1965, President Frei Montalva and his official delegation arrived at Victoria Station in London with Princess Alexandra. In that place Queen Elizabeth II with the Duke of Edinburgh were waiting for them, as well as the Home Secretary, Harold Wilson, the Ministry of Foreign Affairs and senior military officials of the British Armed Forces. After inspecting the Palace Guard of the Buckingham palace with the Duke, the president did a tour in chariot through the streets of the city with the Queen. It is estimated that 500 thousand people cheered the delegation during this event.

Among the activities developed by the Chilean president and his wife Maria Ruiz-Tagle, the visit of Westminster Abbey was highlighted, where he made a floral tribute at the Tomb of the Unknown Soldier and Lord Cochrane’s. At night, Elizabeth II offered a banquet for his guest in the Buckingham Palace’s ballroom and awarded him with the Order of the Bath. In the following days, he had bilateral meetings with the Prime Minister of the United Kingdom and Sir Alec Douglas, leader of the Conservative Party, that aimed at getting the commitment from the British government of technical assistant, professional training and research for Chilean professionals.

On this visit to London there was also time for cultural activities, such as visiting historical places of the city and going for a boat ride on the Thames River where Eduardo Frei Montalva was able to visit the Esmeralda ship which was anchored at the West Indies docks.

The last day of his tour in England ended with a joint declaration between both countries, in which they claim that:

“The governments reaffirm their support to the United Nations and the principles of the Charter of the United Nations. They are convinced that international peace and order depend on the universal respect for the fundamental values of human freedom that for a long time have played an important role in Chile and Great Britain” 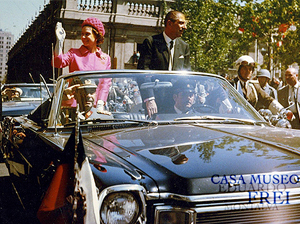 On November 11th 1968, Queen Elizabeth II arrived in Chile after visiting Brazil; she was received at Pudahuel airport by Eduardo Frei Montalva and his wife. Then she was accompanied by the President to the Constitution Square by automobile, where was cheered by people that were waiting for her. Several days before, the Chilean press at the time, made announcements allusive to his arrival.

In the evening, President Frei Montalva hosted a reception for his guest at La Moneda, which was attended by his wife and part of his family. The event’s photographs can be seen by the public in the hall of the second floor of House Museum.

Among the activities that the Queen carried out in our country, we include the visit to O’Higgins’s monument on Alameda Avenue, where she laid a wreath, the visit to the Military Academy, the National Congress and the Supreme Court. In the context of his meetings with the Chilean parliamentarians, the Queen offered a speech where she said: “Chile and Great Britain share the love and respect for democratic institutions”.

One of the most important events during this visit, and the most private, is Eduardo Frei Montalva’s invitation to Elizabeth II to dinner in his private residence, located on Hindeburg street. The entire family had the opportunity to receive the Queen in their own house in an intimate encounter, before the attendance of the royal couple to the National Stadium. There, they watched a performance of Oscar Wilde’s play “The Happy Prince” and a football match between Universidad de Chile and Universidad Católica football teams.

The House Museum’s dining room has a re-creation of this dinner, occasion where President, Chilean and England ambassadors, Víctor Santa Cruz and Frederick Mason, and the then Minister of Foreign Affairs, Gabriel Valdés and  their wives, shared with Queen Elizabeth II and her husband the Duke of Edinburgh. In the dining room it can be observed the crockery silverware that Queen Elizabeth gave to Frei Montalva decorated with the Coat of Arms of Chile and the British Crown along with a silver cutlery also given by her.

The next day the Queen left Santiago to go to Valparaiso and then travel to Pucón. On November 18th, in the morning, she returned to England, leaving behind a country from which she kept fond memories, as she manifested to the ex-president by letter a few years late.