Object of the month: A President in the Island

On February 2, 1967, Eduardo Frei Montalva made a surprise visit to Juan Fernández archipelago with his wife. After 4 hours of flight aboard a Grumman amphibious aircraft of the Chilean Air Force, the then president gathered with the locals, at that moment no more than 350 people. 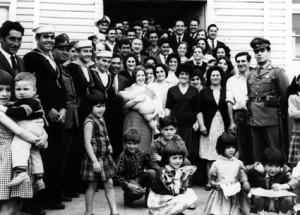 One of the tasks that Eduardo Frei Montalva carried out during his government was to visit many districts and towns in extreme parts of the country such as Putre (1970), Aysén (1966), Punta Arenas and the Antarctic (link to the object) not only with the goal of implementing the “Revolution in Liberty” and the programs by the central government, but also with the intention of learning about the initiative of the residents of each place according to their needs. In this context, on February 2, 1967 the then president made a singular –and surprising- visit for a day to Robinson Crusoe Island.

A witness to this visit, is the current person in charge of the Public Library N°331 Daniel Defoe of the named place, Victorio Bertullo Mancilla, who came to live in 1964 to the island as a “regular school teacher in the only school that existed for 3 years” . According to what Bertullo says, Frei Montalva was resting in the Cerro Castillo Palace in Viña del Mar, when the idea of traveling for a day to the island with his wife, María Ruiz-Tagle came up. In this improvised visit, the president was accompanied by his personal assistant of the Chilean Air Force and other members of the CAF. The four-hour trip was made in a Grumman amphibious aircraft which could land on the sea.
Bertullo specially remembers Frei’s charismatic personality. He “conversed with all the residents in the island -various families of the place. At the moment of his visit we were no more than 350 people.“ 2.

The relationship that Frei had with this remote national territory, had already started years before, because in 1965, the president received a request from the Uruguayan writer and painter Blanca Luz Brum Elizaide, resident at that moment of the Island, to change the name of the islands formerly known as Más a tierra and Más a afuera and preserve the name of the Santa Clara3islet.

The reason was that in that place, for four years and four months, the Scottish boatswain Alejandro Selkirk remained there. He landed from cruising Cinque Ports to Más afuera. His stories were a source of inspiration for the novel “The life and strange surprising adventures of Robinson Crusoe” by Daniel Dafoe, which is one of the most famous books in adventure literature. The idea was welcomed on the part of the president as a way of exploiting the touristic development of the archipelago. 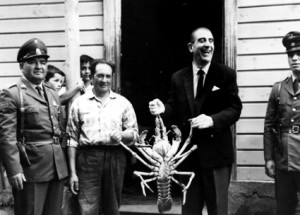 In this way, on January 13, 1966 in Presidential Decree number 130, the names of the island were changed. Thus Más afuera changed to Alejandro Selkirk and Más a tierra became known as Robinson Crusoe. According to the Decree, the idea of the modification was “to have proper identification between the island and the protagonist of a book of greater world outreach” considering that “this change of name would not, in any way, play down the importance of the Portuguese marine who found these landforms, since the archipelago would continue to be named Juan Fernández, a name known in almost all the Cartas Marinas 4(Maps of the sea).

On the same day the Decree was signed by President Frei Montalva in Santiago, the then Vice secretary of the Interior , Juan Hamilton and the Minister of National Defense, Juan de Dios Carmona arrived to the island on a brief one-day tour, being welcomed by the Sub delegate Fernando Rojas Gallardo5. Hamilton declared then: “There is no historic doubt, and the documents states that Selkirk landed on the Island which currently has his name, where he lived without human company for years. All these precedents augment the aspects that make this island a wonderful place and cause a greater touristic impact” 6.

Several projects for infrastructure improvements were added to all this in order to enhance the people’s quality of life; projects such as: a landing field, the creation of the Fish Production Cooperative with the support of INDAP, the rebuilding of the dock in Cumberland Bay7 and the cleaning of the bay carried out by the residents. The initiatives were stated by the Sub delegate and locals, in a town meeting in which Hamilton and Carmona8 were present. Additionally, the members of his cabinet were named together with his plan of improvements for this part southern Chile.

3. http://www.comunajuanfernandez.cl/tierra_afuera.htm. information corroborated by Victorio Bertullo in the telephone conversation.