Rural life and public education: childhood of a future president

His first years in Lontué, a place located in the province of Curicó, Region of Maule, marked the future view of a young Eduardo Frei Montalva. So, within the fields, games, rural teachers and friends of different places, the former president was building a thought which would allow him fosters the main guidelines of his government (1964- 1970), as Agrarian Reform, Rural Unionization and Educational Reform, just to name a few. 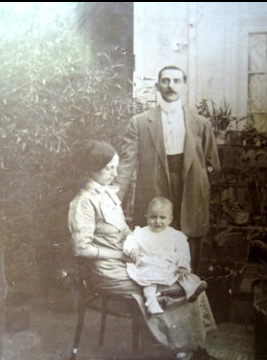 Eduardo Nicanor Frei Montalva was born at the beginning of XXth, on January 16th of 1911, in a diverse Santiago in which an elite that followed European customs and traditions, specially, French ones. This style was accentuated in mid XIXth century, coexisting with the new middle class emerging from saltpeter’s boom. This origin context helps to understand that the experience of infancy and childhood depended on social and economic status of parents . In the case of Little Eduardo, his parents, Eduardo Frei Schlinz and Victoria Montalva Martínez, belonged to a simple and poor middle class, according to Cristián Gazmuri, his main biographer.

In the book “Eduardo Frei Montalva y su Época“, Gazmuri explain how the social status of the former President “passed in the anonymity without profiles”. His job performance was developed within the “bureaucracyborn as consequence of the growth of the State” after saltpeter’s boom and wealth that covered from teachers to civil servants and militaries, as well as “retail traders, individual employees, technicians, affluent craftmen, intellectuals, a motley mass” . In Frei’s own words, he described Santiago in a context that, although being capital city, still be provincial in its costumes: “I was born in Santiago the year 1911, but it was another world. There was no radio, televisión, refrigerators, nor washing machines. You could barely see cars and comercial aircrafts weren’t know, as well as airports where today the land is sowed. Very few knew nuclear energy existed and no one suspected that atomic bombs could be made. The customs were modest and time passed slowly. People were satysfied with so little and didn’t feel controlled by unrestrained ambitions” .

On one hand, the intimate world, childhood and adolescence of Eduardo passed within a “stable family nucleus” , where in his own words he said “I adore my mother and respect my father ”. We could say that Fre Montalva’s family fullfill with perfection playing the expected roles in a simple middle class family of that time: a father with strong moral authority yet kind, a loving mother persistent in the raising of her children, with strong religious fervor.

Not surprisingly, the first years of Frei Montalva’s family was strongly marked by the work decisions of the father, who in the light of the upcoming birth of his second child, Erwin Antonio (on February 5th, 1914), and looking for better opportunities, moved with his family to Lontué, in the province of Curicó. The reason for this was that the Santiago of that century offered a narrow margin of work for a immigrant as Eduard Frei Schlinz, who did not speak fluent spanish and developed a work of low demand in the capital city, a place that wasn’t kind with immigrants as grassroots level.

That is how Eduard Frei arrive working to Lontué Vineyard, as an accountant, working also as “minister of faith” for staff contracts . Besides, the same company that hired him, gave him a house located in a complex build by the same Vineyard for the employees . There is where Eduardo Frei Montalva had his initial school education, experience that accopanies him during his life and remembered in different times because of the significant importance that had in the development of his personality.

Given the precarious economic context of his family, his parents could not aspire he or his brother and sister raised and educated by governesses in a framework of private parenting, reserved for the elite, reason why Eduardo entered to Public School N°16 of Lontué.

The rural school, as many others existing in the chilean countryside, was in hands of teachers with basic education, where the formation was limited to reading, writing, basic general knowledge of maths and others . This educational system marked the differences present not just at socio-economic level but among urban and rural sectors of centenary Chile. As Jorge Rojas Flores explains: “Schooling was another differentiation element. Within children coming from poor yet educated familes, his experiences could make early contact with rural socialization forms, without leaving aspire ascending socially” . So, the rural educational model in which Eduardo Frei Montalva learnt his first lessons was proper of elementary schools appeared after the influence of liberal thought in chilean educational field, in the mid XIXth century, emerged from the government’s point of view of the concern for giving elementary education to working clases as a condition to “civilize them, and through this, modernize the country” .

Meanwhile, teaching was exercised by teachers who participated since that early beginning of the professionalization at the start of XXth century, in the context of a public, free and mandatory education.

His teacher was Isolina Muñoz Arriagada with whom he kept a strong link until the death of his first teacher. According to the his cousin’s story: “She loved him very much and never stopped meeting him. When she couldn’t go to Santiago, he travelled to Lontué. She always said that Eduardo the kid was the most playful and intelligent student she ever had in her 30 years as an school teacher” , situation that opposes to the memory of Frei himself, who confesses his school performance was the regular of any kid in that context: “grades were given at the schoolyard and once it was my turn, teacher said: Eduardo Frei: regular, regular, regular, regular”. However, his classmates remembered he graduated to 4th year of elementary school with high grades.

During this stage, marked by a strong family austerity, he commented on his “Memories” that: “Of that little and poor school I have a happy unforgettable picture, of its principal, teachers, classmates, all sons and daughters of poor country people. The friends I frequented were sons of other families, owners of lands or estates managers. However, although having lived with them, they didn’t leave in my memory such a print as the ones who sat on the school desks of that little rural school” .

Reading was important within middle class chilean families, but reduced to a very simple and unfriendly format for a child and, while during the centenary are known adapted versions for children of encyclopedias, generally, the access was to books without pictures and small format . Within the familiar enviroment, his mother was the strongest influence in his early intellectual education, leaving the catholicism she practiced very present. According to the Research of Jorge Rojas Flores, at the end of XIXth century, Catholic Church began to be besieged by its political and social endeavor, because of this, the Christian and catholic though “began to rest, mainly, in the educational function, which was developed by the women inside the home” . In that framework, Victoria Montalva played the role of a very catholic mother with her children, where the teaching of readind is presented in form of the Bible and its pious lessons, saint’s lives and examplary people as part of the adquisition and development and good habits .

Out of the school scope, Eduardo Frei’s childhood was common for a kid who lived in a rural zone, with leisure and play areas within the surrounding fields. His classmates of that time said: “Although Eduardo was always tall, he had a little mampato horse (horse from Chiloé) called “No sé” (“I don’t know” in spanish). He lent us the horse but made the others wait for their turns making contests. Who won was the first in riding the horse”” .

The great friend of Frei Montalva’s firstborn was a classmate who passed away in 1962. “His name was Pomelio González Ibarra, a humble boy, son of country people, who studied with much effort. In fact was the greatest friend of Eduardo. They sat together. In football matches they were teammates and both were very good at joking” . This games and watching the trains rolled by, mean of transportation that had a great impact during his moving and migration infancy, since in his adulthood the experience of tarin travelling was associated, as he described, “travel and adventure ”.

In 1919, Eduard Frei Schlinz returned as an accountant to work at Empresa de Ferrocarriles del Estado (State Railway Company), in Mapocho Station in capital city, the reason why the family returned to Santiago.

This coincides with the beginning of the adolescence of the firstborn, who came into contact with the first transformations of modern life in the city. Although this abrupt change, Eduardo’s rural infancy will be key in his biography.

Years later, as law student at Universidad Católica de Chile, Eduardo Frei could modernize and update his country thought rooted in the country of Lontué. This experience is consistent with his political and intellectual Christian Social thought and social justice that will develop through his life, and will begin to take shape during his government via political agendas as Agricultural Reform, Rural Unionization and Educational Reform, some of the central axis of the estructural changes and modernization that he carried out in Chile.

In 1970 Eduardo Frei Montalva returned to Lontué, as President of the Republic, to deliver along with Education Minister –Máximo Pacheco Gómez- a new Public School. In this framework he points out: “Here I studied, here there is an imperishable memory, and something has been done for the public education in this period, I expect it will be a compensation for my part of all I recieved in this little rural school, because I don’t build or pay the schools but Chile” to indicate, finally, that after passing for the formation given by this school during his infancy: Which is the lesson? That in this country the doors are open for all. They were opened in those years as they are open now” .