Object of the month: The birth of National Planning Office

«For the first time it has been established a general and consistent system of planning of the State’s activity », said Eduardo Frei Montalva for the purpose of the creation, in July, 1967, of Odeplan. An organization that had the goal of promoting and organize the planning system at national, sectoral and regional level, besides coordinating and creating short term programs and policies, among other objectives. 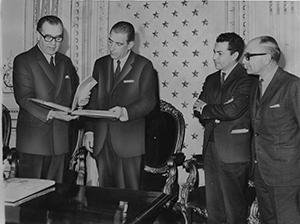 «The advent of the planning has been a necessity even in high development countries. Its urgency and utility in countries like ours is undisputed» . Was an important issue because to achieve the development of a nation involves using efficiently the resources that many times are scarce. This idea was the ground that carried Eduardo Frei Montalva in 1965, ask a group of technicians to begin diverse studies to make a Social and Economic National Development Plan. In this way, the National Planning Office, also known as Odeplan, was created.

Before long he took the lead, the Government of Frei Montalva realized that the country didn’t have a plan that draw comprehensive policies for an economic and social development process. «There were only isolated attemps of some State Organizations for partially planning the investment of funds assigned to a sector» .

Production Development Coorporation, Corfo (full name in spanish, Corporación de Fomento de la Producción) was in charge of production tasks, as the publication of a System of National Accounts that, simply put, is a description of the economy activity of a country.

The work developed by Corfo was, certainly, a contribution to the economic planning, but didn’t gave a clear view of how diverse economic activity sectors were related each other, nor how the growth of a particular economic sector could influence or require a parallel rise of the other sectors to have a compatible and balanced growth of country’s economy. That is why, one of the most important works of Odeplan was the improvement of technical equipment required to develop a Social and Economic Development Plan.

The haste which needed for the organization to work was the reason why in 1966, it was introduced before the Congress, the organic draf bill that gave legal status, as the former President mentioned in his Second Presidential Message of the same year. Then, on July 14th, 1967, is published in Diario Oficial (Official Institution of the State in charge of publishing legal rules that run the country) the law 16,635, that «set the foundations of Chilean planning system» . 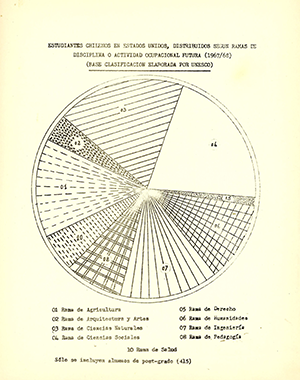 On the whole, National Planning Office should meet six tasks. First, promote and organize the planning system at national, sectoral and regional level. Then, to coordinate and create short term programs and policies, do a periodic preparation and review of the comprehensive program at long term, make those programs had a compartmentalization and regionalization (in other words, created to meet the needs and support advantages of the regions and its economic sectors), to improve the statistics and planning techniques, and finally, organize and sistematize International Technical Assistance according to National Plan.

That is how Odeplan should organize and programme in three plans: sectoral, regional and private sector. Sectoral corresponds to joint work with institutions involved in Social and Economic Development Plan, so that planning offices are created in diverse ministries for the Odeplan propose comprehensive short and long term policies that matter those ministries and be in accordance with the National Plan.

In the case of regional planning, it should be take in account that geographical framework in which social and economic activities were developed in each zone, and that is why Regional Planning Offices (Orplanes, abbreviated in spanish) were created to be in charge of regionalization programs of development to decentralize the country administratively, economically and socially. Is the case of the investigation called «Foundations for a Comprehensive Plan of development for Eastern Island», that collected the geographical hystorical, archaeological, and socioeconomical background, thus, raise strategies which would lead the Island to an optimal development.

Finally the planning of the private sector it is based on the creation of Planning Committees in the diverse sectors of productive activity whilst workers such as businessmen are represented, deliver their experiences on how the sectors had changed and what they needed to reach an optimal development.

On the other hand, as it was previoulsy mentioned, one of the duties of Odeplan is to coordinate, control, assess and promote foreign assistance. This is done through International Technical Assistance Department (DATI in spanish) and its help is shown in different actions: scholarships, studies, projects, supplies or experts that visit the country for counseling or coordination work with some particular sector. For example, in the industrial sector, the Project for Development of Small- Scale and Medium- Sized Industry was implemented, in which was joint work with Technical Cooperation Service and the cooperation of United Nations Program for Development.

«Fort he first time, it has been established a comprehensive and consistent programming system in State’s activity. The creation of a central planning organization system at presidential level, of a sectorial planning structure working in different ministries and public institutions, and the establishment of Regional Planning Offices in diverse zones of the country, constitute, evidently, huge progress in connection with the precedent situation» .

Even though «the system still suffers some natural flaws, that certainly constitute the ground on which an scheme, that includes the participation of national community in the decisions concerning social and economic level of the country, must be studied» .

Odeplan functioned until 1990, year in which it was transformed in Cooperation and Planning Ministry of Chile (Mideplan, abbreviated in spanish) by decree Nº 18.899 in July 19th that year, acquiring the range of ministry.