Women’s month: Marks of great women of the 20th century

In this women’s month, EFM House Museum wants to distinguish a group of women present in the tour around the house. What do they have in common? All of them were great leaders and/or politicians of the time, role models for their work, genius and personality, they were part of the life of the former President Eduardo Frei Montalva and left testimony of his biography in the objects that the residency of Hindenburg preserve today.

When we visit House Museum, we will find diverse objects of a high patrimonial and sentimental value, which had great significance for Eduardo Frei Montalva. These are directly related to the former president’s public and private life, as well as family, friendly, political and diplomatic relations. With them as witnesses of the history, our journey begins to get to know the women who have left their mark in EFM House Museum.

María Ruiz-Tagle, Eduardo Frei Montalva’s wife, also known among her closest as “Marujita”. She not only fulfill the role of housewife, as was the costume of the time, but she also played an important part as First Lady of Chile during the government of Frei Montalva (1964-1970). Her main responsibility was the founding of Mother´s Centers (CEMA for its acronyms in Spanish), work developed along the same lines as the President’s government program in what was called the Social Promotion. María Ruíz-Tagle’s role was fundamental for the economic and social development of Chilean women; for the first time in Chile, thousands of women benefitted from education and training, generating financial resources to support their families with their own work.

The memory of Marujita lives in every corner of House Museum, with photographs and personal objects, where her presence is revealed inside the house. An example of this is her wardrobe, located in the main bedroom, which reflects the typical fashion of the 1960s and the elegance she used to dress as First Lady. The clothing in this room, along with the original shoes, is what she wore in the numerous presidential trips and meetings in which she worked daily. In this place it’s also her rosary – a gift from Pope Paul VI –  her sewing scissors with which she used to make the uniforms of her children, covers for books, and some other arrangements of the house, in addition, a photography of her as a young woman is on her chest of drawers. While, the living room exhibits a portrait of her painted by the Chilean artist Raúl Monteola (1905-1975) in 1964. The work is a painting on canvas, made with oleo pigments with the glaze technique. Likewise, there are multiple photographs in other rooms, in which we can meet her during the different stages of her life, from her childhood to her adulthood, sharing with her husband, children and grandchildren.

Irene Frei Montalva was the former President’s younger sister; however, she left her own legacy thanks to her great social work: professionally, she stood out for the special attention that she gave to the poorest families in her career as social worker, working at the National Patronage of Infancy Institution and at the Roberto del Rio Hospital. She was part of the National Falange Party along with her brother Eduardo, coming to occupy the position of Director of the Women’s National Department. Later, once the Christian Democratic Party was formed, she was a member of the National Council on behalf of women and director of the Department of Social Action. During the municipal elections in April of 1963, she was nominated as councilor by the Municipality of Santiago, being elected with the highest national majority. Her political work was developed in the same field as a social worker.

At the beginning of Eduardo Frei Montalva’s presidential candidacy, she dedicated herself completely to the work on his campaign and it is in that moment, when she was performing these functions, that she unexpectedly passed away in August of 1964 (at the age of 48) in a car accident, less than a month away the presidential elections of 1964. A serious blow for the future president.

House Museum exhibits two photographs of Irene Frei. The first one is at the beginning of the tour, where she shares stage with her brothers, Eduardo and Arturo, and their wives. The second one is in the dressing room, among many family images; she is posing in a black and white portrait.

Legends of the 20th century 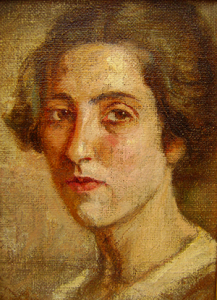 Gabriela Mistral. Beyond the women of the family’s life of Frei Montalva, it is her friend, the outstanding Chilean poetess; being this friendship, little known to some Chileans. Thanks to his work as leader of the National Association of Catholic Students, Frei has the opportunity of to travel to Europe for the first time: both are in Spain, specifically in Madrid, April 9th of 1934. Their friendship starts mainly through letters; the themes of these messages were diverse, such as descriptions of the political and social reality of the time. They also dealt with property matters that Gabriela had in Chile, she requested that Eduardo Frei to handle them as a lawyer.

On the second floor, a pencil portrait of Mistral with a dedication to the president is exhibited, a brief overview of almost 20 years of friendship and epistolary exchange. In the house, there is also an oil portrait of the poetess by the Chilean painter Juan Francisco Gonzalez, presented to Frei as a gift by his neighbor and relative of the painter, Guillermo González in 1964. This painting reflects the perfect style of the national artist, more concentrated and detailed, simply adjusting to objectivity.

Another of the greatest female figure highlighted at House Museum is Queen Elizabeth II of England. In the house’s dining room, we will find a recreation to remember a historical fact: the visit of the Queen to Chile and the dinner with the President.

In November 1968, Queen Elizabeth II visited Chile as a sign of support to the President Frei Montalva, who had the opportunity to receive her in his own home. At that time, the confirmation of the monarch to dinner at the Hindenburg residency impressed the public opinion, given that the fact skipped the protocol since it wasn’t common to have a meeting of this magnitude in a president’s residence. Chile and England ambassadors, Victor de la Cruz and Frederick Mason and the then Minister of Foreign Affairs Gabriel Valdés, accompanied with their wives also attended this dinner. The House Museum’s dining room keeps the crockery that the Queen gave to the President in 1965 when he was on his tour through Europe. The porcelain is decorated with the Coat of Arms of Chile and the British Crown, along with an original silver cutlery, also given by her.

We cannot fail to mention women leaders who visited the President’s family home, the Prime Minister of India, Indira Gandhi and the Minister of Foreign Affairs of Israel, Golda Meir, whose portraits are shown in the meeting room.

Eduardo Frei Montalva’s life was surrounded by important national and international female personalities that were important for his personal and political development. Each of them complemented him and inspired him to develop his role in different stages of his life, as a student, father of a family, lawyer, politician and President of Chile.