The visit of Maha U Thant

At the end of August, 1966, an important protagonist of worldwide politics of 60s visited Chile. During his stay, the Secretary- General of United Nations, Maha U Thant opened the building of ECLAC and made a number of protocol activities, besides a conference about the origin of armed conflicts in a time marked by Cold War and Vietnam War. 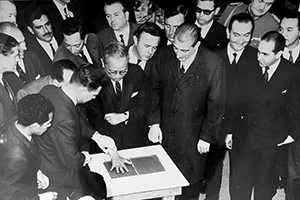 In August 28th, 1966, Maha U Thant, the then Secretary- General of United Nations (UN), and President of Chile Eduardo Frei Montalva, opened the building of the United Nations Economic Commission for Latin America and the Caribbean (ECLAC), located in Dag Hammarskjöld Avenue of Vitacura district. This ceremony happened within the framework of the visit of the Burmese diplomatic to our country.

Maha U Thant was born in 1909 and studied at National High School of Pantanaw and at University College de Rangoon, both in his country. Then, he performed important positions in education world, teaching in different institutions . In the 50s, his career started to link with United Nations, first as a Permanent Representative of Burma at UN with the Rank of Ambassador (1957-1961). Next, in 1961, he was President of United Nations Conciliation Commission for Congo, and President of a Committee of a Fund of United Nations for Development, according to his biography, available on UN’s website . Noverber the 3rd, 1961, he was appointed unanimously by the General Assembly to serve as Secretary- General of United Nations to end with the unfinished period of the previous secretary Dag Hammarskjold, whoo died before end his office. Subsequently, was named Secretary- General by the Assembly for the period between November 30th, 1962 to November 3rd, 1966, and then a second period, finished in 1971, was added.

As a Secretary- General of UN during the 60s, Maha U Thant had to negotiate in Missile Crisis which involved United States, Cuba and Soviet Union. Likewise, he witnessed the gestation of Northamerican intervention in Vietnam, which meant to be, in long-term, the only armed conflict the world power has lost in its history. This was very controversial for U Thant who pointed out in 1966 that “in my view, the current conflict of Vietnam does not represent more than the desires of a country to reach Independence. When this happens, and I know because it also happened in my country, it is likely that violent and explosive problems arise, and that strange forces fight, which does not contribute to peace nor democracy” . He also added that “this conflict must be solved through the immediate cessation of bombing, the cessation of military operations and it must be proceed with meetings of the parts to converse and deal with this issues” . These statements revealed a politic who was not frightened by potential interests of world powers, which raised interest of the population.

In parallel, Chile was in the middle of the project implementation “Revolución en Libertad” (“Revolution in Freedom”), headed by Eduardo Frei Montalva’s government. This initiative brought a series of structural nature reforms as Copper Chilenization (adquisition, on the part of Chile´s State, of big mining companies’ shares percentage), Popular Development, and Agricultural Reform, which intended to deeply change chilean society. Those changes were welcomed by ECLAC, which advised through the years a series of measures of economic nature for the countries of Latin America and the Caribbean. Among these advises, the idea of industrialization of the economy could be specified to reduce the economic dependency to international market which was materialized in Chile with economic model ISI (Import Substitution Industrialization), and the need of modernizing agricultural sector in economic terms because there was the certitude that rural areas of the country worked within the traditional logic, and were ineficcient from productive outlook.

From this view, there was some tune between economic policy recommended be ECLAC and the legislation of Eduardo Frei Montalva’s government. In fact, statements that the newspaper La Nación wrote, U Thant pointed out he wishes Frei and Chile the best success” in these transformations that were made in the country.

Given the above, his presence in Chile at the end of August, 1966, generated big expectations. For example, El Clarín newspaper noted that U Thant was the “man who roars in United Nations” . The day of his arrival, Sunday 28th August, was recieved by Foreign Minister, Gabriel Valdés, Executive Secretary, Jorge Mayobre, among other authorities.

Along the three days the visit lasted, he opened United Nations building (where he planted a Peumo tree as a symbol of the link between United Nations and Chile) , visited the country’s Congress , was at Club de la Unión, met with the President Eduardo Frei , and held a series of conferences among which is noted the one he performed at Universidad de Chile about the origin of armed conflicts. With regard to this subject, the then Secretary- General of UN pointed in a press conference given in our country: “The first cause are political differences; the second, economic and social order represented in issues betwee the rich and the poor. Each day the difference between rich and poor nations delves, and because of that, I think this is the most severe cause in within the conflicts that elicit among peoples. The third cause is colonialism legacy, and the fourth, racial differences. All these causes become explosive the international situation, and if fighting for peace is required, it must be done with bravery”.

Besides, U Thant was declared an honored citizen by Santiago’s City Hall , and he made an offering to Bernardo O’Higgins’ monument located in Alameda. Wednesday 31st August, he returned to New York, saying goodbye with a “See you soon” , although the circumstanceas led him not returning the country, despite his intentions. Nevertheless, not returning did not meant oblivion of his visit to Chile. In a letter addressed to President Eduardo Frei Montalva, in February, 1967, he pointed his deep gratitude for the warm welcome recieved, inviting the head of State to visit the United Nations in the future . A clear signal of good diplomatic relations that had their origin in the visit of 1966 and the good impression he took of Chile in such landmark.