Object of the month. November 2016 Copyrights and the government of Eduardo Frei Montalva

After a long story, that began in 1828, intelectual property rights in Chile gave an important step with the enactment of law N° 17,336 of Intellectual Property and Copyrights in 1970. 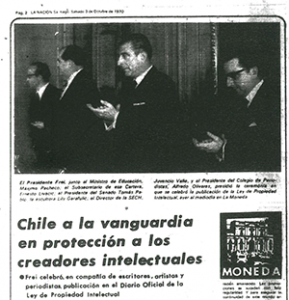 This regulation was created, in words of the then President Eduardo Frei Montalva, to never again be “possible in our country, the user of a work omit unpunished the name of the author (right of authorship) or altered it without appropiate authorization (right to the integrity of the work)”.

On December 30th, 1968, President Eduardo Frei Montalva delivered a message for the Parliament to pass the new law of intellectual property. A proposal that had as main purpose to protect the “rights that, for the mere fact of being the creators, the authors of these intelectual works acquire literary and artistic domain as well as the scientists”.

Admittely, this story had a number of previous background. The first reference existing about intelectual property in our country, appeared in the Political Constitution of Chile enacted in 1828. In arcticle n°152, part of Chapter X addresses the “security and property guarantee: Every author or inventor will have exclusive property of its Discovery, or production for the time the Law would grant; and, if this would demand its publication, the author will be granted of competent compensation”.

In 1834, it was created as the artistic and literary property law. So, the exclusive rights for the authors was granted, during their lives, for reproducing the created work, sell and distribute it.

They were also compeled to deliver three copies of their work to the Public Library of Santiago. Likewise, there was the possibility to denounce of misappropiation pf thirty- party property to whom had printed, recorded or replicated other author’s own work.

In 1925, it was officially Law Decree No. 345, in which it was specified that intellectual property needed to be resgistered in the work of National Library. It has 28 articles and a transitory one in all, and indicated the protection of the work for twenty years after the death of the author of it.

In 1950 the deadline for the protection of the property of the work for up to 50 years after the death of its author was extended, besides covering different types of creations, along literary and artistic ones there are musical compositions, photography, newspapers and magazines, engravings, lithographs, projects, architectural sketches and models, among others.

The project of Eduardo Frei Montalva

In 1968, in his presidential message, Frei Montalva remarked the neccesity of working in “one of the most severe omissions of the existing law when establishing, definitively, applicable legal regulations to the contract of representation and publishing, an inadmissible void in normative provisions of any modern legislation about intellectual rights” . Consequently, the Minister of Education, Máximo Pacheco, was left in charge of promoting the draft bill, so never “be possible again in our country that the user of a work omit, unpunished, the name of the author (authorship) or altering the work without due authorization (right to the integrity of the work)”.

The law was structured in six titles with a total of 108 articles, which alluded to matters as the moral right the creator have with regard to the work (regardless of having a register or not, as it was required in Law Decree No. 345, 1925) so the authorship be vindicated, the integrity of the work be maintained and, if the author wishes, to keep it anonymous.

Furthermore, two institutions were created and had dissiminal endings. On one hand, the Department of Intellectual Rights, the organization that was in charge of Intellectual Property Register, attended inquiries and reports private people or public services made and the advicing of the Government with reference to copyrights, related rights, and related matters.

On the other hand, with Law No.17.336 was created Cultural Chilean Corporation, which had to “coordinate and promote artistic creation and seek for cultural dissemination throughout the country, with particular emphasis on the most abandoned places and vulnerable groups of the national territory” . However, this organization never had an actual existence and was finally repealed in 1992.

It is worth stressing that the ground of this draft bill comes from the diverse regulations and theories created in different international conventions, as the one in Rome, 1961, about related rights, the Universal Convention about Copyrights in 1952, or the one in Republic of Perú on the year 1962. Conventions and international treaties which Chile signed and ratified, for then unite and adjust them in this draft bill for the needs of intellectual property of that time.

In parallel, diverse associations and people linked to the world of art gave their opinion and support intellectual property draft bill. Among others, it is worth mentioning Writers Society of Chile (abbreviated SECh in spanish for Sociedad de Escritores de Chile) represented by its president, Luis Sánchez Latorre; the president of Professional Union of Folclorists and Guitarists, Fernando Vivando; Clodomiro Figueroa as representative of Society of Playwrighters of Chile; president of Union of Radio Journalists, and representatives of Chilean Association of Painters and Sculptors, the Professional Radio Actors Union and Televisión de Chile.

Finally, after all corresponding discussions in both parliamentary chambers, on Friday October the 2nd, 1970, Law No. 17,336 was published in Diario Oficial (official State body in charge of publishing the legal standars which rule the country). This official event was celebrated and headed by President Eduardo Frei Montalva, and also Máximo Pacheco, Minister of Education; Ernesto Livacic, assistant secretary, along artists, journalists, and writers, as the sculptress Lily Garafulic, the actress Anita González, the president of College of Journalists , Alfredo Olivares, and the director of Society of Writers of Chile, Juvencio Valle took part of it.