Object of the Month: The Roof beams of the House Museum of Eduardo Frei Montalva

Ten years ago we celebrated the construction of the roof beams of the cultural space located in Hindenburg Street #683. The only House Museum of a former Chilean President and that is why in October we turned to the origins of this particular initiative. 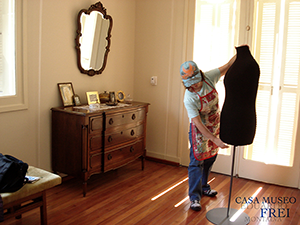 Turning a family home into an open space for the community, with a script, a story and an educational project, is no easy task. Transforming the building of Hindenburg Street #683, Providencia, in the present House Museum Eduardo Frei Montalva required the effort of professionals, technicians and workers, who worked for months. A work that was held in October 2007, with the traditional festival of the roof beams.

But let’s start from the beginning. In the mid-1990s, the first intentions were to convert the house of the family Frei Ruiz-Tagle into a museum. The initiative was born from the children of Eduardo Frei Montalva, with the consent of his widow, Mrs. María Ruiz-Tagle, who was at that time little more than 80 years old and had recently left his house in Hindenburg street to live with one of his daughters, according to the account of some members of the family.

However, it will not be until one year after the death of Mrs. Maruja- as Mrs. María Ruiz-Tagle was known in her family – in April 2002, when a concrete proposal materializes, thanks to the consultants Consuelo Valdés and Carmen Vergara, along with their team. It will be from this moment that the idea of opening the Hindenburg house as a museum will take shape, but there will be a few previous steps, such as getting the property to be declared a National Monument, among others.

The House declared as a National Monument

“Declare National Monument in the category of Historical Monument the house of the former President of the Republic Mr. Eduardo Frei Montalva, located at Hindenburg Street No. 683, Providencia district, province of Santiago, Metropolitan Region.” (1)

With the signing of Decree No. 586 of the Ministry of Education and nine months after the application to the Council of National Monuments, in May 2005 the one who was the home of the Frei Ruiz-Tagle family for four decades obtained legal protection as heritage of all Chileans.

Among the reasons that support this declaration is the fact that it was ordered to be built by a former Chilean President, in addition to having been in his only residence until his death in 1982, even during his presidential term. The latter meant that in this space the president received important national and foreign figures. Added to this statement is its architectural value, prototypical of the architecture of the 40’s, which is also possible to observe in most of the buildings in the neighborhood.

But it was, perhaps, the excellent state of preservation of the building and the intention to make it a museum, the most remarkable of the request and so considers the document to which we have referred…

“… The house is intact, as the former president left after his death in 1982. Both the property and the movable property that has been kept by the Frei Ruiz-Tagle family in its original place. The furniture, decorative objects, two desks, including his personal library, autographed photographs, such as Gabriela Mistral’s and an oil portrait painted by the Ecuadorian painter Oswaldo Guayasamín […] (2)

The preparation of the House
The entire year 2005 was very significant for the history of this project, because while awaiting the result of the request made to the National Council of Monuments, worked on a crucial phase: the lifting of information that would support the project. In this way, the bibliographical revision was realized on the time in which Eduardo Frei Montalva lived and ruled; interviews with relatives, friends and political comrades; the inventory and documentation of the collection of the future museum; the photographic registration of the property before the works of conditioning and the original location of the furniture, decorative objects, paintings, among others. 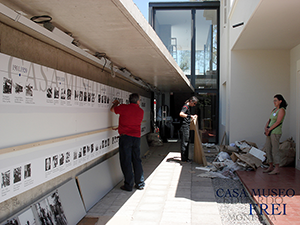 It is then that at the end of 2006, the House Museum of Eduardo Frei Montalva project begins, with works inside and outside the building, following the guidelines established by the National Architecture Award (2014), Teodoro Fernández. The works were designed to restore, conserve and condition, altering as little as possible the original infrastructure of the construction, recovering the spaces, until getting as close as possible to the period 1960-1980.

In the process the garage, the laundry and the kitchen were demolished, building in its place the reception, bathrooms, administration offices and other services for the operation of the future cultural space. Also worked in the restoration, cleaning and painting of the inner and outer walls, besides doors and windows. Air conditioning, electricity and museum lighting were other factors that were added to the construction.

In parallel to the heavy work, the works of conservation and restoration of the decorative objects, furniture, and works of art and textiles that were exhibited or kept in the warehouse were carried out. In the same way, the museographic contents and the educational program that Casa Museo would offer to its visitors were prepared.
Another element that worked during this process was the graphic and industrial design, a key factor when it comes to achieving a good design experience for visitors, especially thinking that the project stated that:

“As a general rule, the intervention will be minimal and discreet, necessary to allow the visitor to know, through the objects and testimonies exhibited, the family atmosphere of the former President, his lifestyle, personality and relevant milestones of his public career. In other words, it is a question of whether the enclosures (or environments) and objects ‘speak for themselves’. ” (3)

In the middle of October, 2007 the thick work was in its final phase, leaving everything structural ready for the lighting, air conditioning, painting and wallpaper makers to begin a new stage of work. Then came the moment to celebrate that an important part of the process culminated successfully.

However, in our country there is no more traditional celebration in the field of construction than the celebration of the roof beams, a festival whose origin is unknown, but which cannot be lacking when the thick work of any house or building is finished.

The popular tradition says that if it is not celebrated “as God commands,” bad luck will fall both in the work and in its owners, and such bad future even the most skeptical prefers to prevent. And although we do not believe in such superstitions, finishing such an important stage deserves to be celebrated.

The expenses of the party are run by the principal of the work, who should entertain those who participated in the execution of it with abundant food, usually a traditional barbecue, the corresponding drink and everything that is considered necessary to make this event an occasion memorable that, of course, is done in the same place of the construction.

Thus, on October 19, 2007, ten years ago, the tijerales of Hindenburg’s 683 building were celebrated in the garden, thus closing a stage of the project that gave life to the only residence of a former Chilean President who would open the public as the House Museum of EFM and that works in this way until today, with guided tours from Tuesday to Sunday, from 10:00 to 18:00 hours.