The exhibition called “Development for the Earth. Frei and the Agrarian Reform” will be available at the library of the Headquarters of UNIACC from 2 to 17 of November. The entrance is for free. 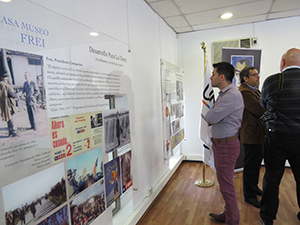 In the context of the 50th anniversary of the promulgation of the Agrarian Reform Law No. 16,640, the UNIACC will be presenting the itinerant exhibition “Development for the land: Frei Montalva and the Agrarian Reform” in November. Created by the team of the House Museum of Eduardo Frei Montalva , the exhibition presents a vision of different milestones of the process: Its antecedents, the proposals of the presidential campaign of Frei Montalva, the role of the peasantry in the success of the process, the regulations and their impact, among others. Giving a didactic vision of a historical process that meant a real development for the earth.
The exhibition aims to bring unpublished material to the community, such as photographs, publications and press appearances of the time, as well as historical and social context information.

“This exhibition tries to portray through six panels, one of the most controversial and important processes experienced by the society of Chile during the 20th century. A law that embraced three governments and that changed the face of the Chilean rural world forever. As members of the House Museum of Eduardo Frei Montalva, we are happy to be able to contribute to the development of education outside the classroom and culture in the country, contributing to the commemoration of the 50th anniversary of the Agrarian Reform in Chile, “said Maite Gallego, the assistant manager of the House Museum of EFM. 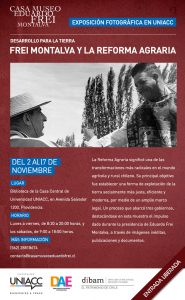