Object of the Month: The first trip of Eduardo Frei Montalva to Europe *

At the age of 22, Eduardo Frei Montalva had the opportunity to travel, an opportunity that allowed him to know other cultures and open his horizons. In 1933, in the framework of the Ibero-American and Latin American Congress in Rome, he traveled to Europe on behalf of the ANEC. A trip of four months of duration, and that was forever recorded in his way of seeing life.

Any person contemplates a trip as an opportunity in which they can learn from other cultures and know themselves. For Eduardo Frei Montalva it was not different. In 1933, when he was 22 years old, he lived a great adventure as an adult: traveling to Europe. It should be noted that it was a time when it was difficult to afford this type of trips, and a stretch that took about 20 days of travel, much by sea.

It all began one day in 1933, when Eduardo Frei Montalva met with Ignacio Palma (1) in the corridors of the Pontifical Catholic University of Chile, where the ANEC meetings used to take place. When he climbs one of the stairs, Palma informs him: “You, together with Manuel (2) and Oscar Larson (3), who will be the advisor, will go to Rome to represent the National Association of Catholic Students, ANEC, to the Ibero-American and Latin American Congress that will be will be done at the beginning of next year.” After a moment of surprise, Frei Montalva first asks him what he expects to pay for a trip to Europe for three people. Palma told him that there is no need to worry about that, they will have financing from entities such as, for example, the Archbishopric of Santiago.

The purpose of the Congress was to know the Latin American panorama regarding to the lay Catholic movement, with a special focus on Catholic Action. In this context, talks by European teachers and philosophers were also organized.

Full of expectations, the Chilean delegation said goodbye to their friends one morning on November 9, 1933, at Mapocho Station. After a step through Argentina (Mendoza and Buenos Aires), Uruguay (Montevideo), Brazil (Rio Grande Do Sul, Santos, Rio de Janeiro where they shared with groups of Catholic students, they embarked at the end of November towards the Strait of Gibraltar.

Finally, on Saturday, December 2, they manage to see the Mediterranean and the columns of Hercules. The next day it was possible to see Algiers from the sea. And, as soon as the boys got off the ship, they went to a mosque and saw the prayer of the Mohammedans. After seeing the region of Sardinia in the distance, on Tuesday 5 they arrived in Naples and after getting off the boat and staying in a hotel, they immediately left to walk the city.

After touring streets, museums, churches and even one of the three largest aquariums in the world, they traveled to Pompeii and on Thursday, December 7, they met with the rest of the delegations that had also arrived in Naples. To the end of the day, they went to greet the ambassador of Chile in Italy, Fernando Freire García.

The next day, Frei Montalva dressed in tails, left the hotel with the ambassador, heading for the canonization of Santa Bernadette. The place where Frei Montalva stayed in the event was privileged: less than 10 meters from the papal throne, near the Prince of Austria and around ambassadors of several countries.

Pope Pius XI also participated in the inauguration of the congress. On the second day, when the authorities were elected, Frei Montalva suggested that the presidency be rotating for each assistant country and that there should be only one general secretary. The delegates of the other countries accepted his proposal and also added that they had already agreed that he was the president, but since there would not be a permanent one, Frei Montalva would then be the general secretary.

December passed quickly, thanks to the development of this congress, which was divided between the trips that the young people made on their own, the lectures of professors and philosophers and the visits to which archaeologists and specialized professors took them, showing them the city. They also had the opportunity to listen to Pope Pius XI and to meet him, both as a group and as an individual. Eduardo Frei Montalva would have in his memories a phrase of the Pontiff: “But do not forget, in today’s world, quality and quantity are essential. You cannot live apart from the mass. The qualitative, but also the quantitative is essential. ”

End of the Congress and the tour of Europe

The days of January of 1934 were not so different from those of December, only that the Congress had already finished and now there was only one tour of the city. Frei Montalva visited places such as the Sistine Chapel, Gianicolo or Villa Borghese, the catacombs of San Calixto and San Sebastián, the Vatican museum, several galleries, visited bookstores, listened to Mussolini in the Senate, went to the opera and attended mass in different churches. Only a list of all the places could show in some way all that the young people visited during those weeks they were in Rome. 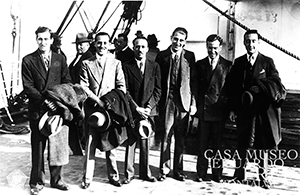 Within Italy they also traveled to Assisi, Florence and Venice, where he visits galleries, goes to mass, attends metaphysical classes, gets soaked with all this culture and on the 16th of this month celebrates his 23rd birthday.
On February 5, Eduardo Frei Montalva leaves for Switzerland, the land of his father, Eduardo Frei Schlinz. There, he met iconic places, like the bridge of Butin that is on the Rhone, also went to the League of Nations and climbed the Salève Mountain to see Mont Blanc and how people skied and skated.

Then he sets off for France, where in Lyon he meets again with Oscar Larson and the Peruvian delegation. In Paris the young Eduardo visited the iconic places of the city, visited bookstores and attended a class of the philosopher Jacques Maritain on cosmology, given at the Catholic Institute in Paris. There he also met his father’s sister, Eduardo Frei Schlinz, who became a nun.

On Wednesday, February 21, he embarked with Garretón and Larson to Brussels. They toured the city and met the procession of people who participated in the burial of Alberto I. The next day was the burial of the King and Friday 23 the coronation of Leopold III. But they also took advantage of meeting the Catholic Workers Youth. In Brussels he was more in touch with the political ideas that interested him.

In fact, in his memoirs the city stands out as “an important political and social laboratory”, since the country was divided between social Christianity and socialism and considered that from here they could learn especially about the formation of unions, agricultural cooperatives, between other aspects, because in addition the Belgians were considered like the pioneers in the subject of the social christianity.

After marveling at the city of Bruges, he returned to Brussels, where he met with the president of the Confederation of Christian Trade Unions, Henri Powels, who guided them on the trade union movement.

During March, the interviews continued in Brussels, in Louvain, for example, with people from Catholic Action and the League of Christian Workers. Then they traveled to Holland, passed through Rotterdam, Antwerp and The Hague, and traveled to Cologne, Bonn, Mainz and Frankfurt in Germany, where he rescued that duality between being an old city and having “the most modern buildings in Germany”.

After a return to Paris, where he finally managed to reunite with his paternal aunt, at the end of March he travels to Madrid, Spain, to participate in the Holy Week celebrations and get to know several of the city’s churches and tourist sites such as La Puerta of the Sun and plays. From Spain he rescued his people, how welcoming they were.

In Spain there was also much to visit and know. Toledo, Granada, Sierra Morena, Córdoba and Baeza, where they saw plays, toured the streets, museums, palaces and gardens.

On Saturday, March 31, in Madrid, an encounter took place that would have consequences for his future life, marking the beginning of a friendship. That day he met with the poetess Gabriela Mistral, who in those years resided in the city. This meeting was repeated on Monday, April 9, a conversation that came to Eduardo Frei Montalva to consider a person “extraordinary, noble, sincere.” They talked about the Chilean people and the poet read a book that she had not yet published, in a meeting that lasted about four hours and was repeated for several days, the last of which was Monday, April 16, the day on which Eduardo Frei Montalva gets on the boat that would bring him back to Santiago de Chile, after another 20 days of travel.

* Note: all the information in this text comes from the travel journal that Eduardo Frei Montalva wrote when he made this journey from November 1933 to May 1934 and his Memories, published posthumously.

Notes:
1. Student of Engineering and part of the Student Federation of the University of Chile, but they also belonged to the ANEC, since the association became the meeting point for students of both universities who had a Catholic feeling.

2. Manuel Garretón, student and member of the Student Federation of the University of Chile.

3. Dean of the Faculty of Letters of the Catholic University and one of the first secular religious who preached in Chile and Peru the social doctrines of the Church.