The House Museum of Eduardo Frei Montalva joins the second celebration of Children’s Heritage Day with an Ecoimagination workshop, as well as special tours, contests and surprises for the little ones. Free admission.

What patrimony means? Why is it important to identify and preserve it? In the second version of the Heritage Day for Boys and Girls, which will be held on Sunday, October 22, the House Museum of Eduardo Frei Montalva will once again join this national holiday with the Ecoimagination workshop, which this time unites art, recycling and heritage through the creation of a portrait.

Thus, using waste material such as CDs, old toys, buttons or papers, participants can create a special object that contains a moment or important people in their lives, represented in a photograph. The activity aims to encourage children to identify and value our nearby heritage, along with encouraging our memory.

The Ecoimagination workshop will be, as always, led by Giovanna Guerino, audiovisual communicator, facilitator of workshops of creative recycling and environmentalist. Aimed to children from 4 years old and upwards, it will be held on Sunday October 22 in two schedules: 11:00 and 15:00 hours. The registration is free through the email contacto@casamuseoeduardofrei.cl or at the telephone (562) 28818674. Limited capacity. 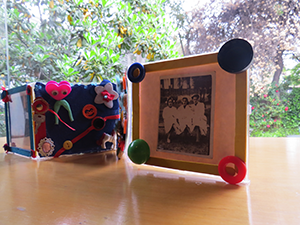 Along with this activity, to celebrate Children’s Heritage Day the House Museum of EFM will open its doors free of charge from 10:00 a.m. to 6:00 p.m. in continuous schedule with the property and the team guides, dress for the occasion, along with special guided tours, introduced by an animation that briefly explains who Eduardo Frei Montalva was.

Also, as part of the two-floor house visit, children will be able to participate in a contest to find the “hidden object”, while they learn in an entertaining way a part of the history of the 20th century in Chile and the world through one of its protagonists.

It should be noted that the initiative is promoted by the Council of National Monuments, together with the National Council for Children, the “Aldea” Collective and UNESCO. In 2016, more than 150 activities were carried out at a national level with the active participation of more than 20,000 children.

A personal library with more than 3,700 books, costumes from the 60s, numismatics, European and Latin American decorations, and even fragments of lunar stone brought by the first astronauts who were on the moon in 1969, are some of the elements that visitors can enjoy. To this is added a photographic archive with more than 8,000 images, and a historical one with more than 9,000 documents, containing correspondence, treatises, and speeches, among others.

The house also has a collection of original paintings of Chilean and Latin American art, highlighting authors such as Alberto Valenzuela Llanos, Benito Rebolledo, Pedro Lira, Arturo Gordon, Nemesio Antúnez and Oswaldo Guayasamín, who made a portrait of the former President in the framework of his visit to the country, in 1969.
As a result of its good state of preservation, in May 2005 the house was declared a National Monument. This, because the Council of Monuments considered that the property is part of the collective memory of an important historical-political period of Chile, in addition to representing one of the prototypes of urban residential architecture typical of the 1940s. 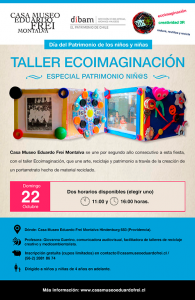 Information: Heritage Day For Girls and Children at the House Museum of EFM
Location: Hindenburg Street #683, Providencia.
Date: Sunday October 22, 2017.
Guided tours from 10:00 a.m. to 6:00 p.m. They do not require prior registration.
The Ecoimagination workshop at 11:00 a.m. and 3:00 p.m. Requires prior registration. Free registration at contacto@casamuseoeduardofrei.cl / (562) 2 8818674. Limited capacity.
Children under 10 years old must be accompanied by an adult.