Learning about art at House Museum of EFM

The “Landscape and social portrait” course,  uses as a base, the Collection of Painting that belonged to the former Chilean president to enter into some elements of aesthetic appreciation and social context of artistic movements and outstanding painters. Free registration, limited seats. 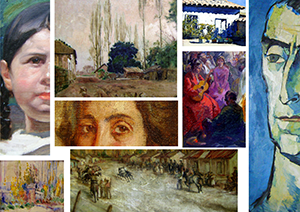 The Eduardo Frei Montalva Painting Collection is composed of works by a group of artists who were active in Chile from the end of the 19th century until the first half of the 20th century. Its historical context, coupled with the social and economic changes that occurred in the country, were reflected in his works, thus giving a different twist to the aesthetic experience they provoke. This is the basis of the art course that will take place in November in the house located in Hindenburg Street #683, Providencia.

In duration of four classes, “Landscape and social portrait” will provide tools of aesthetic, social and historical analysis using mainly the Collection of House Museum EFM, which stands out in a display located at one place; an important exhibition of Chilean paintings. From Ernesto Charton from Treville to Arturo Gordon, to Antonio Smith, Alberto Valenzuela Llanos, Juan Francisco González and Pedro Lira, along with some pieces from two important Latin American artists like the Ecuadorian painter Oswaldo Guayasamín and the Chilean painter Nemesio Antúnez. Together this collection allows knowing the evolution of the landscape genre in national painting and the incorporation of social themes, at the same time that the historiography of local art begins to establish the parameters for its study, appreciation and valuation.

Another important fact is that the collection was personally gathered by Eduardo Frei Montalva, thus revealing a more unknown side of the former Chilean president. A series of works that remain today in the walls of what was his family home in Providencia, for more than 40 years, today declared a national monument and converted into House Museum, open to the community.

Some topics to be addressed include the description of the “art situation” in Chile around the middle of the nineteenth century, and the creation of the Academy of Painting in 1849, the analysis of the historical context of the painters who are part of the Painting Collection of the museum, and its relationship with the Academy, to know the influences of these artists, and to recognize the social, economic and political changes that were developed in Chile during the first decades of the 20th century, among others.

This activity, which is part of the extension activities developed by the House Museum of Eduardo Frei Montalva, is addressed to the general public. The registration is free (limited seats) and is made by making a reservation through the mail contacto@casamuseoeduardofrei.cl or by telephone (562) 2881 8674. Those who complete the four sessions of classes will receive a certificate of participation.