Fourth walk through the museums of Providencia

Come and visit the different milestone landmarks and permanent exhibitions of the Museums Benjamín Vicuña Mackenna, the House Museum of Eduardo Frei Montalva and the carabineer Historical Museum of Chile, are included in this free tour organized by the three institutions in conjunction with the Department of Tourism of the Municipality of Providencia. Saturday, September 30 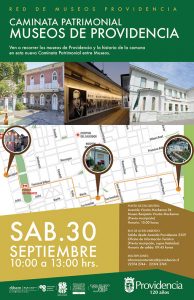 For the fourth consecutive year, the Museum Network and the Department of Tourism of the Municipality of Providencia organize this walk with the aim of spreading the cultural heritage of the commune through a free tour.
The walk, which will last approximately three hours, contemplates the visit to the different museums and the tour through important milestones of the commune as Viña del Mar Street, declared Typical Zone; the Bustamante Park and the Castillito Sermini, located in José Miguel Infante with Los Jesuitas.

The activity begins at the Benjamin Vicuña Mackenna Museum, where the legacy of an important intendant, politician, historian, journalist, writer and traveler is exhibited. In the place also it is the Historical Library, Historical Monument from 1992, and unique original place that is conserved, part of the Fifth House of Benjamin Vicuna Mackenna.

In the House Museum of Eduardo Frei Montalva, visitors will visit the building where the former President lived with his family for more than 40 years, and today preserves a collection with more than 350 objects, including the original furniture of the family, several masterpieces of Chilean and Latin American painting, decorations received throughout his political career, his library with about 3,700 copies of various themes and even fragments of Moon stones brought by the Apollo XII crew.

Finally, in the Carabiners Historical Museum of Chile, it will be possible to make a chronological tour through the history of the police function in Chile, through the different settings and the use of touch screens. Is important to mention as an important part of the tour: The collection of vehicles, which includes the Papamóvil that used S.S. Juan Pablo II during his visit to Chile in 1987.

The activity will be held on Saturday, September 30 at 10:00 am, and will begin at the Benjamin Vicuña Mackenna Museum located at Av. Vicuña Mackenna #94, Providencia. Those interested should register with the Department of Tourism of Providencia (Av. Providencia #2359), through the email informacionturistica@providencia.cl or contact the phones 22374 2743/22374 2744/22374 2745. Free entrance. Quotas are limited.