May 12th, on Friday, the house where Eduardo Frei Montalva lived with his family celebrates 9 years since its opening to the public as a cultural space. In this opportunity the celebration includes guided tours during all the month by the two floors of the house, besides an exhibition called “Faces of the Reform”, a photographic tour that commemorates 50 years of No 16,640 Agricultural Reform Law. 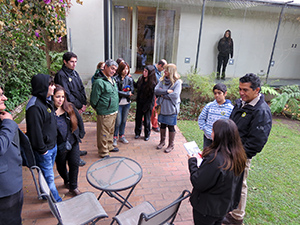 The place in which the house of Eduardo Frei Montalva is based in was bought by the President in 1937 when he was working as Director of El Tarapacá newspaper, in Iquique, in a period in which Providencia was a district in recent development. The house is located in #683 Hindenburg street, and was built by the architect Osvaldo Baeza. Frei Ruiz- Tagle family established in it, definitely, in 1942.

That is how the story of the house began and is then declared National Monument in 2005 because its achitectural, historical and patrimonial value. On May 12th of 2008, the house re- opened its doors as the first House Museum of a chilean President. To celebrate its 9th anniversary this cultural space offers free entrance and guided tours all month, besides the exhibition “Faces of the Reform”, a photographic tour by the chilean fields of mid XXth, commemorates 50 years since the enactment of No. 16,640 Agricultural Reform Law, promoted by the former President in 1967.

It is worth to mention that in House Museum Eduardo Frei Montalava the visitors can meet an important part of XXth century history of our country and the world. Through the life of one of its main characters they can see pictures, a personal library with more than 3,600 titles, pieces of art made by prominent artists, a pipes collection and fragments of moon rocks brought to Chile by Apollo XII crew, among other historical and patrimonial objects that conform part of the collection of more than 350 elements.

In addition, to have a closer experience, the museographic concept of EFM House Museum is not to use showcases, keeping in that way the direct contact with the original objects and furniture that are kept in the same space in which were placed while Frei Ruiz-Tagle family lived there, that allows to appreciate the everyday enviroment of the time. In that way, the visit includes a view to places full of history, as the garden, the library known by the press of that time as “Little La Moneda”, or the dining room where the family had dinner along with the Queen of England Elizabeth the second, during her visit to Chile in 1958.

Since May, part of this archive is part of the exhibition called “Faces of the Reform” that recues a series of chilean fields pictures from before and after Agricultural Reform implemented during the government of Eduardo Frei Montalva, a process that the former President cotinued since the government of Jorge Alessandri, and it was then proceeded by Salvador Allende’s presidential term.

The exhibition shows a more intimate view about the characters of this process which meant one of the most radical changesin the rural and agricultural chilean world,

Furthermore, along with the celebration of its anniversary, during May, EFM House Museum will participate in International Museums Day and Cultural Heritage Day of Chile, Sunday, May 28th, with various of surprises for its visitors.