Casa Museo Eduardo Frei Montalva presents a new Film Series linked to science fiction and visions of feasible and imagined futures during the past century. This cycle will be carried out on April’s Sundays, from 4pm in Hindenburg Street # 683, district of Providencia. Free entrance. 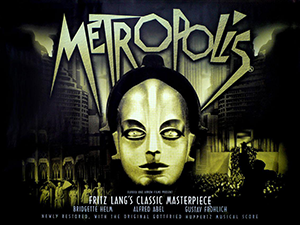 Did you know that within Eduardo Frei Montalva’s personal books there are some science fiction iconic authors? That’s why- with the support of Goethe Institute and Instituto Chileno Francés- Casa Museo Eduardo Frei Montalva will show four movies which belong to this gender and look for futurist stories created during XX century, and this allow us to travel a little further in the tastes of the former President, who had in his library books by Ray Bradbury, Isaac Asimov, Pierre Benoit, and classical Julio Verne, among others.

The Film Series “XXth Century Futurism” is a free entrance event, which begins on Sunday April 2nd, showing “Metropolis” (1927), one of the greatest German expressionists movies directed by Fritz Lang. This is the first film considered Memory of the World by UNESCO and tells a dystopian view of a megalopolis of XXI century, where the rich have the power and means of production, surrounded with luxury, ample spaces and gardens, while working- class are doomed to live in dramatic conditions in an underground guetto, where the industrial core of the city is located. However, this situation could drastically change.

On Sunday April 9th, Ray Bradbury’s novel “Fahrenheit 451”, in hands of director François Truffaut, could be watched on screen. This film tells the story of Guy Montag, a disciplined firefighter in charge of burning books the government banned. He meets a revolucionary teacher who dares to read, and soon after he becomes a fugitive obligated to choose not just between two women but his personal safety and his intellectual freedom. 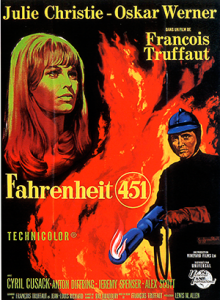 On Sunday April 23rd, the movie “Who am I” (2013-2014), directed by Baran bo Odor, will be presenting a view, encoded as a thriller, about hackers, that referes to two big issues: the search for personal identity and the attacks on a world electronically interconnected. Award winner of Bavarian Prize to the Best Director with 6 nominations for German Film Awards- including Best Film and Best Screenplay- this movie had an overwhelming success of audience in Germany.

The Film Series ends on Sunday April 30th with “Der Riese” (“The Giant”) -1983- by Michael Klier, film made by, almost entirely, material captured by surveillance cameras: streets, squares, shopping centres and public spaces like airports and railway stations, besides banks, stores and supermarkets. A documentary in its purest form and, at the same time, a nighmarish future vision.

All movies will be showing at 4pm in the audiovisual room of Casa Museo Eduardo Frei Montalva (Hindenburg Street #683, district of Providencia). Free entrance and air- conditioned room. It is worth stressing that this Film Series is part of extension activities, organized by Casa Museo EFM and counts on the support of Goethe Institute and Instituto Chileno Francés. 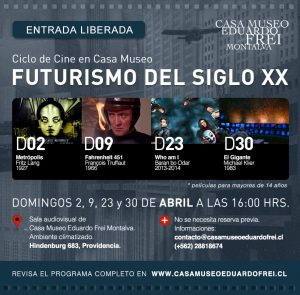 *Movies are in original language.
Contact us for further information: contacto@casamuseoeduardofrei.cl / (562) 2881 86 74.