Free guided tours by the house of the former Chilean President, live music, contests, and “Faces of the Reform” -a photographic tour by XXth century Chilean country- to commemorate 50 years of the enactment of Agricultural Reform Law.

This is the only house of a former President of Chile that was transformed into a museum, besides being declared National Monument, and it joins, once again, to the celebration of Cultural Heritage Day this Sunday, May 28th. A celebration that this year has as a slogan “One, two, three for me and our heritage”1, and highlights the games and sports as instances of collective encounter, part of our cultural heritage.

In the activity, arranged as every year by Chile’s National Monuments Council (CMN in Spanish), diverse institutions along the whole country will open their doors for the chileans to visit a set of buildings that harbour a valuable cultural legacy. In its anniversary month, House Museum Eduardo Frei Montalva, located in Providencia district, will open its doors for free, to the public in general, from 10 am to 18 pm. 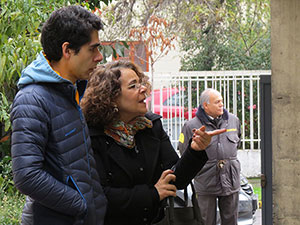 Besides the free guided tours by the two floors of the house, in this opportunity, the public could also appreciate the exhibition of “Faces of the Reform” -a photographic tour by the scenes of one of the most controversial processes of XXth century- through the images of its main characters: countrymen and countrywomen.

This project was set down by Frei in his Government Programme, in which its main objective reaffirmed to “modify the current system of land tenure, giving countrymen and countrywoman the possibility of being owners, increase productivity (…) An organized country town will produce food for Chile; will be a market for our industries; will participate in national life and its benefits with full equality, will contribute to the well-being, social peace and the common progress with its effort and solidarity contribution” (Chile 1964-1970).

EFM House Museum has about 400 heritage and historic objects, within them, a personal library with more than 3,700 books, clothing of the 60s, numismatics, european and latin american decorations, and even fragments of moon rocks brought as a gift by the Apollo XII crew in 1970. To this, we add a photographic archive with more than 8,000 images, and a historic archive with more than 9,000 files that has correspondence, treaties, speeches, among others.

The House Museum has also an original chilean and latin american art painting collection of prominent authors as Alberto Valenzuela Llanos, Benito Rebolledo, Pedro Lira, Arturo Gordon, Nemesio Antúnez, and Oswaldo Guayasamín, who made a portrait of the former President in the framework of his visit in 1969.

Along with the tour by the house, declared National Monument in 2005 for joining the collective memory of an important historic-politic period of Chile (in addition to represent one of the urban residential architectural prototypes of 40s during XXth century), this cultural space will wait for its visitors with diverse contests in with the participants could win books written by Eduardo Frei Montalva or a DVD with compiled information about audiovisual archive of EFM House Museum, that includes short films, messages and speeches from mid XXth century in Chile.

As the central theme is gaming, “Callejas” trio -composed by Catalina Bolton (accordion), Vivian Carvajar (guitar), and Nelly Avello (violin) -will be playing live in the garden of EFM House Musem. Free performances at 12 am and 16 pm.