To commemorate October 1st, International Day of the Elderly, the House Museum of EFM will open its doors free of charge with guided tours throughout the month, for all people over 60. 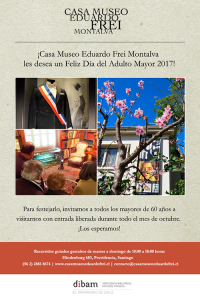 A house that preserves in its interior stories, anecdotes and moments linked to the history of a family during the XX century. A trip to the history of Chile, guided by the life of one of its protagonists: the former President Eduardo Frei Montalva. That is the invitation made by the House Museum that bears his name, to celebrate the Senior Citizen’s Month 2017, with free guided tours during the month of October for all people over 60 years of age.

During the visit to the two floors of the building, declared a National Monument and the only home of a former President converted into a museum, the elderly can discover places full of stories, such as the dining room where Queen Elizabeth II of England dined in 1968 and the library where the former president met with various personalities, known as “La Moneda Chica”.

Along with the above, visitors will have the opportunity to see a permanent collection of more than 400 heritage and historical objects, including costumes from the 60s, numismatics, international decorations, fragments of stone from the Moon, and a collection of Chilean and Latin American paintings, among other attractions.

In addition, visitors will be able to appreciate the exhibition “Faces of the Reformation”, which through unpublished images gives an account of one of the most controversial processes of the 20th century: The Agrarian Reform, within the 50 years of the promulgation of the Law 16,640.

The invitation is open until Tuesday 31 October for all people over 60 years. Groups of more than 12 people must make a reservation writing to: reservas@casamuseoeduardofrei.cl.